Literally in this case: 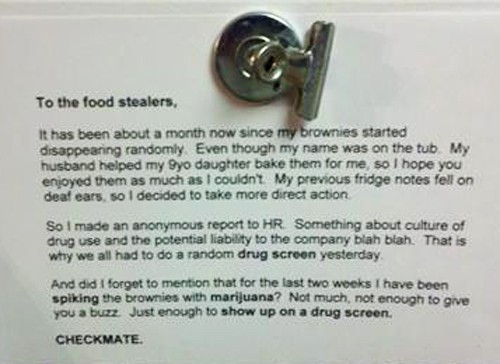 SO whats the best act of revenge you have done?

That is quite simply genius if true

Rubbing chilli oil all over a girlfiends knickers when I found she'd been cheating (and lying) and adding quite a few drops to her washing liquid too.

I heard a couple of weeks later how she'd been so irritated down there, that she'd been to her doctors 3 times in a fortnight and she'd even been to a STI clinic thinking she'd caught something.
About 3 weeks after I'd spiked her clothes she even asked me if I'd given her something (STI) and intimated that she might have given me something, having realised she was a skank I made sure I got tested anyway.

I've seen her quite a few times since, the only time we actually spoke she was so apologetic, but I just said to her that those who mess around with filth, should expect to get more than a little dirty and then I mentioned how I'd already been tested for STIs because I wasn't sure where I'd been

was hygenic enough for my liking, other than that time, when she's seen me she just blushed and disappeared quickly.

I have nothing quite so extravagant...

We were on a lads weekend in Blackpool when we were about 18, and my one mate had been a complete annoyance all night, so when I got back before him I took a dump under his quilt. The things that alcohol do to young minds...

Too much of a nice guy to exact revenge upon someone.

I know. I would have put cyanide in them instead...

ReallyReal wrote:Rubbing chilli oil all over a girlfiends knickers when I found she'd been cheating