A place to discuss things all Premier League.

Whilst a certain amount of flak should go Moyes's way, a lot has to go to the players. For me they seem to be hiding behind the ready made excuse of a new manager, no passion, no fight, no desire today

For me that is the managers fault olly.

If your team under performs that is the managers fault.

Man Utd are a bang average side these days. Fergie worked miracles with the squad he had.

Moyes will take them to a sixth spot or so. Exactly where they deserve to be. The glory hunters will hopefully wise up soon.

As a non-United fan, have to say its massively unfair on Moyes. Players were terrible, lacking in any desire at all. Moyes made the right changes, bringing on Zaha and Valencia, and taking off Cleverley. He did what he could and the players let him down. Again.

Bringing back Fergie would give the players a kick up the arse but Moyes doesn't need Fergie. Moyes needs players giving 100%. If I were a Man U fan I'd be disgusted by the players' performances.

But to be fair to moyes- He is in a much harder position at united than any other manager in the prem.

How can you go in managing united and command the same respect as your predecessor?

Ferguson also left him a squad with lots of problems, ignoring the issues in central midfield over the last few years have left Moyes with not a lot to work with, but Woodward should have been doing a lot better this summer to reinforce it. Fellaini was overpriced and they needed more creativity.

I hope Moyes doesn't get the sack; give him time and still think he will get it right.

Think Utd fans are quickly forgetting that he was left with a dire midfield by Ferguson, one which has been a shambles for the better part of 3 years...it just so happens they got by because last season none of the teams around them could put any kind of form together.

Whilst Ferguson may be idolised by many and rightly so for all he has done; he arguably thought he was bigger than the club given he has stepped down at the perfect time and is now in the background watching it all fall apart at the moment.

This though has been coming, it's just Ferguson was the band aid holding the patch job together. The United team has been patched up season upon season for the past 4 years...barring Van Persie. Now it is starting to show.

Once upon a time the club developed players and brought them through the ranks ensuring the club had a 'solid spine' whilst adding to it with marquee players...now they buy in young players who show some promise and it hasn't paid off.

Including Fellaine this season that's an outlay of £165 million in the last 5 seasons; considering we often here of record breaking turnover and how they are the biggest club in the world that is a pretty small outlay...especially when you factor in the £80m they made on the Ronaldo sale.

Of those players I would argue only De Gea & Van Persie have proven themselves..but more worrying only one signing was a center midfielder...an area they have been crying out for since Scholes left first time around. Carrick & Fletcher have never screamed World class yet year on year passed without Fergie doing anything; the same can be said of never properly replacing Ronaldo or Gary Neville.

For me a lot of the blame on how United are performing now lies with the board and Ferguson because from what I have heard and seen Moyes wasn't given full leverage to spend in the summer and what he was left behind was a carcass of a team which while getting back the title had done so on one of their most uninspiring seasons in recent history.

It's all moyes fault, he had a terrible summer and just seems clueless.

He's taken away the coaching staff all the players knew and worked well with. Rooney aside nobody is performing as well as last year.

We are flat and slow starting in nearly every game.

He is mismanaging the players - why throw zaha on for a league debut after neglecting him all season, how on earth is he supposed to make a difference.

Ent wrote:It's all moyes fault, he had a terrible summer and just seems clueless.

Pardew got it spot on today tactically. HBA substitution also came at the right time to shift the emphasis back on United. Pardew manager of the month, Moyes clueless. Zaha was the desperation card. Utterly embarrassing for him to be called up after what's go on.

Moyes got a title winning squad who until 4 games to go were on for record points and spent £27 million on our weak area.

The league is as weak as it was last season.

Ent wrote:It's all moyes fault, he had a terrible summer and just seems clueless.

Pardew got it spot on today tactically. HBA substitution also came at the right time to shift the emphasis back on United. Pardew manager of the month, Moyes clueless. Zaha was the desperation card. Utterly embarrassing for him to be called up after what's go on.

Whilst you are sticking the boot in a bit it is hard to disagree.

Knew we wouldn't win anything and after the summer knew it would be a tough season but never thought we struggle like this - we've lost a third of our pl games!!!!

Palace have to hope the honeymoon period is enough to keep them up, get as many points on the board now.

Ent, even someone as stupid as you surely can't argue that the midfield Moyes inherited was/is rubbish?

I don't think I'd play any of them in the Newcastle side we have now.

Moyes - "I was due to take him (Van Persie) off after 60 minutes but if I had people would have said what are you doing?

Jeez, grow a pair. Your the manager of Manchester United. Make decisions. RVP was clearly not fit enough to play 90 mins, bring him off & put someone else on who could make a difference. Moyes is scared of the job, fans & reaction to everything currently.

That Utd result isn't good for us.

We have them at home next sunday, cant see them losing 3 in a row.

Now now no need for insults.

He had the guts of £30 million pounds to spend on a midfielder and made a mess of it.

Carrick would get into most sides, look at our last 4 results without him.

We have said a lot of things about united west... We are usually wrong.

cant see them losing 3 in a row.

I was saying that before today, saying United would have a reaction n they didn't. You never know in football. Rooney will be back though

Carrick aside, The united midfield is one of the worst in the league but you still have to blame moyes and woodward for not addressing that properly in the summer aside from that total panic buy with 5 minutes to go in the transfer window

The players havent been playing well but all that highlights is Moyes inability to motivate and inspire them.

We have them at home next sunday, cant see them losing 3 in a row.

I wouldn't worry, we are in relegation style form- last 4 results DDLL

Rooney is back is the only positive - if rvp if fit he might need to play in midfield.

He had the guts of £30 million pounds to spend on a midfielder and made a mess of it.

Carrick would get into most sides, look at our last 4 results without him.

Sorry Ent, I'm just rather over-excited over the result, seeing as we've not won @OT since the 70's.

I'm glad that this is showing Carrick's influence now at United. Been criticised too often in his career but he's a classy midfielder for United. Should definitely be given more time for England.

I'm gonna enjoy it for the 45 minutes it'll last for

Jones, carrick, zaha and wellbeck with Rooney and RVP up front, would not be close to the worse midfield in the prem.

Yes you are playing a few slightly out position, but that is a midfield that would work. Welbeck is good on the left and jones is good at DM.

Was talking to lj.

I'll just address the penalty - apparently a clear one but quite frankly to be champions and successful you have to win in spite of poor decisions and we used to do this all the time.

Jones, carrick, zaha and wellbeck with Rooney and RVP up front, would not be close to the worse midfield in the prem.

Yes you are playing a few slightly out position, but that is a midfield that would work. Welbeck is good on the left and jones is good at DM.

I think jones is a waste at dm, by all means put him in there once in a blue moon but he's not good enough on the ball when carrick is missing. Stunting his development all this choping and changing position.

West Brom all over us now, I've seen this match before...

Man Utd have given Sheffield Wednesday permission to speak to David Moyes about their current vacancy.

Wow, didn't see Newc winning that. The toon were poor at Swansea midweek ( although should've had a pen).

Not quite so big boy.

Given another goal. Kevin Nolan getting sent off would be the best thing that could happen

Redderz tearing the West Brom left back a new one.

Just needs to improve his decisions

Not quite so big boy.

Second half still to come. Can see them still winning though.

Not long now till the bookies finally understand that united simply suck!

Liverpool could be three up, West Ham are unlucky to not have got a goal though, Mignolet looking good.

Three up? From what? We dont deserve to be losing at this point 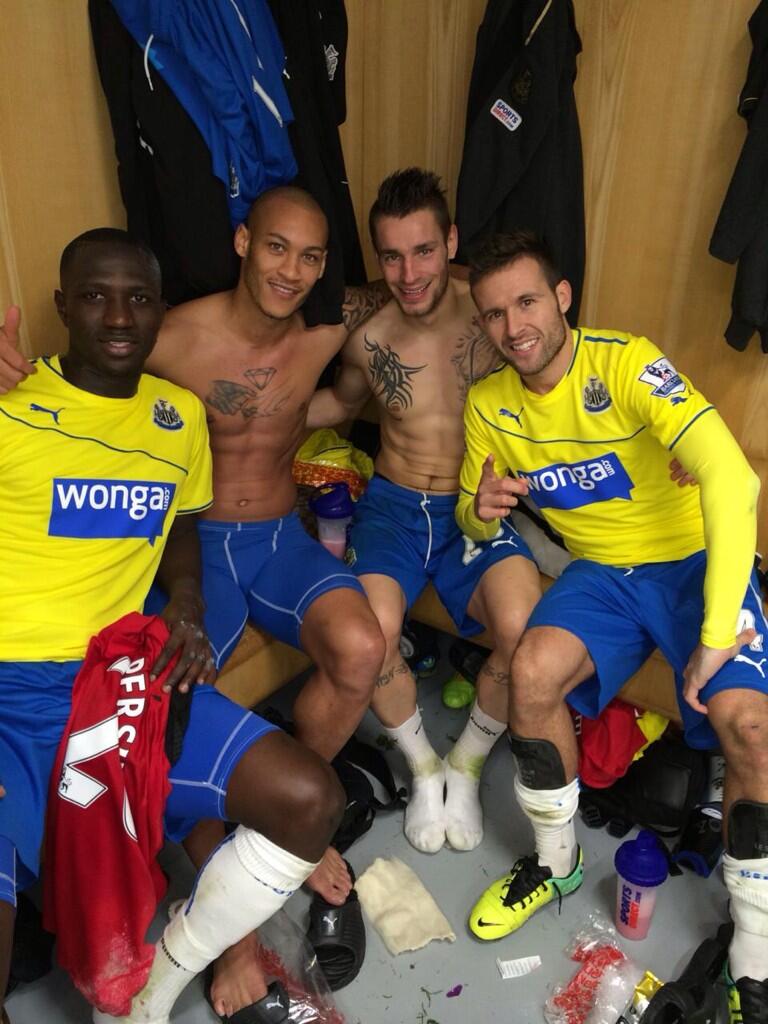 Dolphin Ziggler wrote:Three up? From what? We dont deserve to be losing at this point

The two chances for Sterling and Suarez in which they should have scored.

West Ham have played well and deserve to have scored considering the chances they have had.

Someone wake me up I'm drunk

Even without Rooney & RVP, i think we would struggle.

We just never beat them.

Will concern myself with utd after the Fulham game.

Well it could be 3-3 then. Really, considering we both assisted and scored your goal then it should really be 2-3 as we shouldn't have done that really, silly little West Ham.