Massive assumption but I see an issue with painkillers and booze a pretty nasty mix.

Apparently just meds. Hopefully he just took a little more than prescribed and has not become addicted to his pain medication.

Sounds like a crock of sh1t to try not to lose his sponsors.

Well, toxicology will surely prove whether he's lying or just a bit stupid. Either way, not the finest bit of course management

I still don't understand why he doesn't have a personal driver?!?!

"Unexpected reaction" to medication? That's what can happen when you mix alcohol with prescription medication. We'll see...

But he has come out and stated there was no alcohol involved. Surely he wouldn't be that stupid ...

I think he will accept a plea bargain, or guilty plea, PROVIDED the details of how he became under the influence is not made public.

As soon as I read about this, my first reaction was that he would blame a reaction to his medication. But surely if it was just a bad reaction to medication (which he must have been taking for some time and his doctors would have advised him about mixing it with anything), he wouldn't have needed to stay in a police cell for eight hours to "sober up" or whatever else was needed before they could release him? And WTF was he doing driving around near his home at 3am?? Even if he had a "personal driver!, it's unlikely he'd have called him up at that time in the morning and said "Hey bud, I fancy going for a drive. Come and pick me up" now would he! Was it another nocturnal visit to one of his paid lady friends?

The trouble is, he never seems to be able to tell the truth so it's unlikely we will ever know, unless this one ends up in court.

Lawyers, start your engines. No way this was "just" meds related.

He's worth 3/4 of a billion $. Most people with that net worth have 24x7 security, including drivers. Even if he was having a midnight liaison, he wouldn't be the first and won't be the last. To be as daft as driving himself around while under the influence is just mind boggling.

If it was simply Meds, why is he so sorry for his actions.

"I expect more from myself "

Hunter Mahan sent out a tweet, which he later deleted

There is a lot to read between the lines of that text. Could be nothing, could be the Iceberg to the Titanic.

GPB wrote:Hunter Mahan sent out a tweet, which he later deleted

There is a lot to read between the lines of that text.  Could be nothing, could be the Iceberg to the Titanic.

I will go with Hunner should refrain from armchair psychiatry.

Golf Channel reports that Woods was "cited for improper parking at 4.22 a.m., cited for DUI at 5.50 a.m.".
That's two different timelines from Monday's report, and "improper parking" begs more questions/speculation/ridicule than it answers.

Ah ha, "Asleep at the Wheel". And I thought they were an old country music band.
Sounds more like BoDo every minute.

It doesn't sound as if this will end any better than it started but, if he blew zeroes on the breathaliser, whatever was he taking? Not good.

For someone who so clearly craves the headlines, he has an unerring knack for finding them in all the wrong places.

Here is the police report. 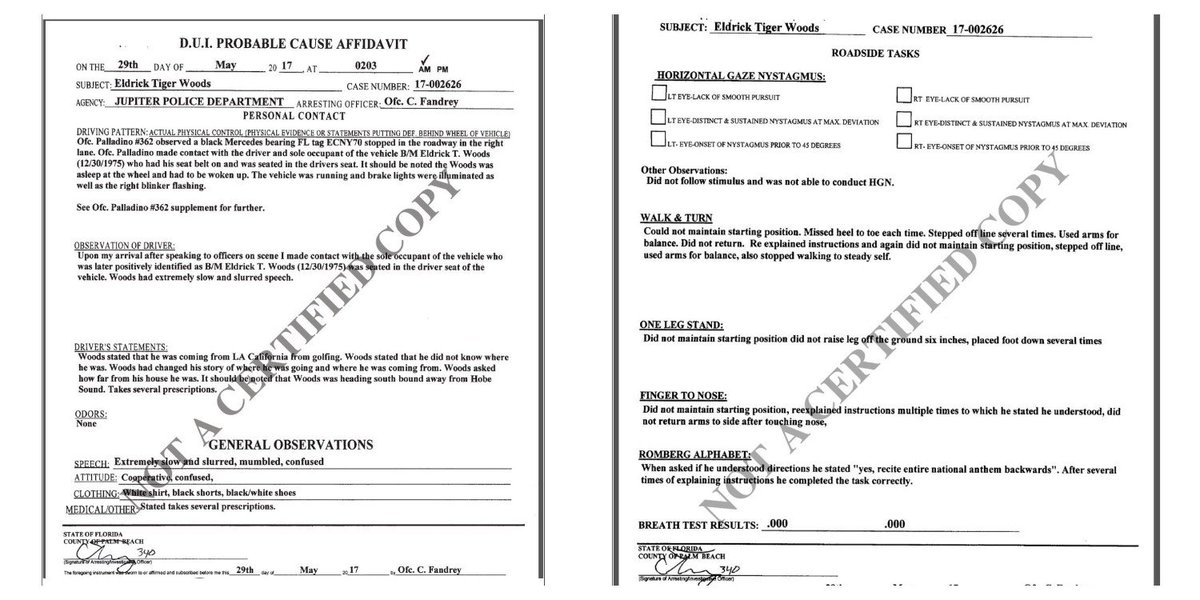 Read one report that he refused.

He's addicted to that stuff, just like Prince and Michael Jackson before him.

I wonder why George Michael didn't use that excuse of "prescription medicine" when he fell asleep at the wheel.

This is incredibly fishy. No doctor in the world would prescribe drugs and not tell his patient, especially someone with the profile of 9C that the drugs will turn you into a m0ng

Claims to be taking 4 different drugs? He's in more trouble than we thought!

He said he was on his way home from 'LA California'. I guess that's the name of the local strip joint..

Eeeehhhhh, sounds like the diary entry of his swing coach????

Why do Americans have such problems with "prescription drugs".

What possible effect could anyone get from having disprin or Sudafed regularly? It's crackers.

Super - A real problem here in the states:

Quite enlightening SR, Still don't understand why you wouldn't just get involved in proper drugs if you're that way inclined.

So now the police have apparently confirmed no alcohol involved. Do we believe that?

super_realist wrote:Quite enlightening SR, Still don't understand why you wouldn't just get involved in proper drugs if you're that way inclined.

I think this line said it all:

Wikipedia wrote:In the late 1990s many Americans were diagnosed with chronic pain, estimated to affect around 100 million people or a third of the US population.

Seriously?? One third of the U.S. population has 'chronic pain'??? Absolute nonsense. I suspect there's a lot of dodgy diagnosing/prescribing in order to simply make money.

The doctors probably get some sorts of commission off it. And if it's addictive, hey ho ka-chiiing! No need to be a kingpin.

Probably the chronic knee pain from their gargantuan weight.

super_realist wrote:Why do Americans have such problems with "prescription drugs".

What possible effect could anyone get from having disprin or Sudafed regularly? It's crackers.

super,
Unfortunately doctors and hospitals are financially incented to prescribe almost unlimited supplies with impunity. They're advertised incessantly on TV, often during the same news broadcasts that report on the problem.
But, presumably because it's a "white" problem, it's described as an epidemic, unlike crack usage.
And the people getting rich are the drug companies who seem to produce unlimited supplies, and the insurance industry who sign off on this abusive expense.

However, we've really got no idea what cocktail Woods was taking except for vicodin which is said to be incredibly addictive.

Solarex, Vicodin, Torix and Vioxx it appears.
Which one is crack?

I vaguely recall this segment, but the way he goes into things is very good.

Why would he have a driver just because he's rich?

If I was mega rich, I wouldn't have one. Being rich doesn't turn you into Alan Sugar and mean you want to be driven.

I know Mac has a driver, but it's a bit different when there's a timetable involved.

Because of security Sup, ultimately he is a valuable asset and therefore a target. There have been kidnap plots against the Beckhams and Tiger is a bigger global star than them so his management team have got to be aware of the risk. Plus they know he's on serious meds, they should have insisted he use a driver.

Just noticed Mark Steinberg was arrested for DUI in 2012 -
http://www.golf.com/tour-and-news/tiger-woods-agent-mark-steinberg-arrested-drunken-driving-charges

Be_the_ball wrote:Because of security Sup, ultimately he is a valuable asset and therefore a target. There have been kidnap plots against the Beckhams and Tiger is a bigger global star than them so his management team have got to be aware of the risk. Plus they know he's on serious meds, they should have insisted he use a driver.

Just noticed Mark Steinberg was arrested for DUI in 2012 -
http://www.golf.com/tour-and-news/tiger-woods-agent-mark-steinberg-arrested-drunken-driving-charges

Most famous people drive themselves. Having someone drive your car doesn't make you any less of a target either.

Tiger is one of the most recognisable sports stars in the world, he's worth nearly a billion $, he's heavily medicated and he's driving himself around Florida in the small hours of the morning?!?! His management team have f&#ked up here, there's no way he should have been doing that without a driver. I'm sure all his sponsors are going absolutely bonkers right now and they will be asking questions of his management. All avoidable with the right risk assessment and management. Very daft.

I agree that he shouldn't have been driving around whilst on meds, but being worth a billion doesn't mean you ought to automatically have a driver.
Plenty people like Beckham, Mayweather and tons of high profile actors, musicians and footballers are photographed driving all the time.

His management team have rightly fecked up, he should have had a driver. I don't know how anyone can argue that he shouldn't have had a driver considering whats just happened. I don't know anything about the strength of the medication he's on, but from what everyone else is saying they would have had to have come with a "This drug may impair the ability to drive or operate machinery" warning on them... Didn't his management team read that and take necessary action? Madness.

Or the condensed answer -

super_realist wrote: being worth a billion doesn't mean you ought to automatically have a driver.

It does if you're Tiger Woods.

No one is arguing that he shouldn't have had a driver in this circumstance.

The issue is the inference that simply being famous and wealthy means you ought to have a driver all the time. Why would you?

Would his management team even be involved in his trips to the doctor? I doubt even someone as thick and stupid as 9C would need his manager in the doctors with him.

Having said that, his management team are clearly as stupid as he is given his background but I doubt whether he includes them in his doctor visits. Maybe 9C ignored their advice anyway? 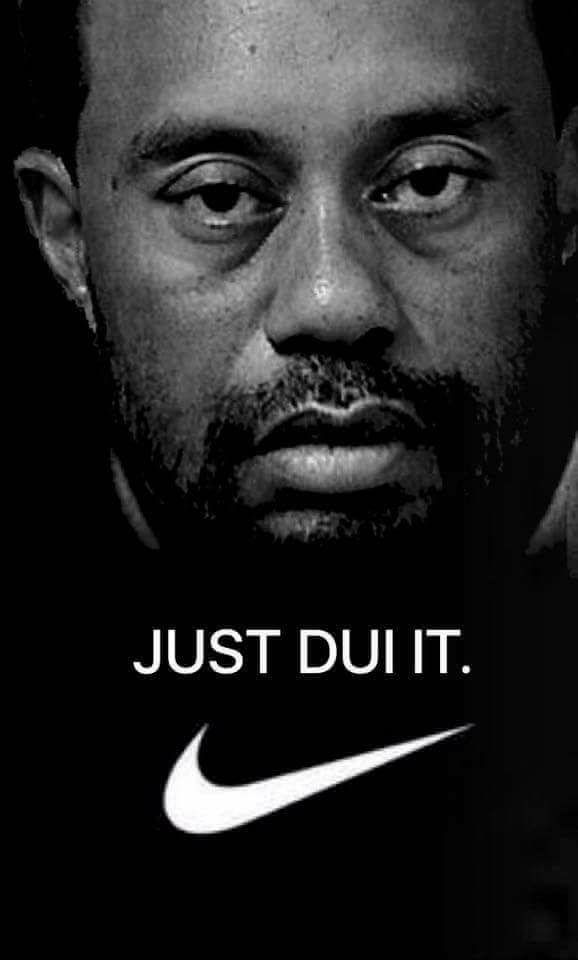 Imagine the call from Nike/Bridgestone/Rolex to Mark Steinberg. Probably a burst eardrum.

Forget all them, it's Taylor Made which will probably be the most annoyed.

You say that but I needed the kerfuffle around this to realise he was a TM club staffer now!

I thought he'd only recently stated that he was pain free for the first time in months thanks to the recent fourth back operation. Why is he taking so much medication? Unless, of course, he's addicted!