Good bit to go but like I said tremendous effort and pride in Thais second half. Doing the right things.

Be good to spoil the party. Next year we have to be the team with a season/party to spoil though.

If Ashley actually sells, then yeah a backwards step. Until that point pretty similar but West Ham should have more to spend than Ashley usually makes available

Just John wrote:Benitez isn’t leaving. WHU is a backwards step, has equally questionable ownership, and managing in a stadium with such a shocking atmosphere, is hardly appealing. £6m release clause to get Benitez too.

Pretty much a done deal, lad. Just waiting for West Ham to cough up the silly money.

Would be a terrible mistake to let Benitez go and probably just reaffirm that Newcastle won't be getting much investment next season.

We ain’t paying £6m, giving him 100k a week and giving him the money in the transfer market that he’d want (which is the real thing that would lure him from Newcastle - if he got the investment here that Newcastle weren’t giving him)

Emery will interview, Nagelsmann has said no twice, Pellegrini will talk but we won’t pay.

Ranieri has been sacked. No compo needed

Just John wrote:Benitez isn’t leaving. WHU is a backwards step, has equally questionable ownership, and managing in a stadium with such a shocking atmosphere, is hardly appealing. £6m release clause to get Benitez too.

Pretty much a done deal, lad. Just waiting for West Ham to cough up the silly money.

WHU is a club in a mess from top, to bottom. Rafa isn’t even contemplating the move.

The same kinda applies to Newcastle under Ashley

Wouldn't blame him if he leaves Newcastle for West Ham. Can see Newcastle struggling next year if he does cos he won't fork out for a decent replacement manager (Probably Chris Hughton)

Doubting your own point by stating ‘kinda’.

I wouldn’t compare the tightness of Ashley, to the clear incompetence of Gold, Sullivan, and Brady. They’ve created an absolute circus at WHU over the years, which has led to numerous on-going issues, including the stadium saga, the disconnect between the rioting fans and their club, and finally down to poor dealings in the market, leading to an ageing squad.

Yes, we want Ashley removed at some point, but at least Ashley is an astute businessman, whereas those three are completely incompetent at running any kind of football club. Just ask supporters of Birmingham City. They are architects of their own unpopularity, and are the main reason behind the crumbling state of the club, that WHU fans are now suffering.

I have no worries at all, regarding the links between WHU & Benitez. It won’t be happening, and in time, that will be proven.

We finished top half. WHU finished where?

One second, is John actually arguing going from Newcastle to West Ham would be a step down? Jesus

Backwards step. Smaller, joke of a club, run by a trio of incompetent clowns, in a stadium unfit for purpose, with fans rioting left, right and centre. Just finished bottom half, and we did the double over them. Horribly, ageing squad too. Total mess. No-brainer for the fat spanish waiter to remain up north.

Agree with all till the end of the first post.

We have better individuals but not good balance. And we hugely underachieved this year to your overachieving. So suggests he may have more to work with, were any of it true

The state of that. A whole two-point gap!

As I think someone said earlier, basically every club outside the top 6 or so is more or less on the same level at the moment. Unless you're going to a club that has real CL ambitions the only reasons to move are that you'll get more money or think the squad is a better fit for you.

Even in their current state West Ham are a better proposition than Newcastle. I know where I'd rather be/live.

And when did Newcastle ever win the World Cup?

The club have said they’re confident of getting a manager within seven days who has European and premier league experience.

That suggests, considering the bravado to announce it, it is Rafa it Pellegrini. Would obviously include anyone from Wenger to Ancelotti, but let’s not be daft. It could also include the return of the Pardigal son

FreekShow wrote:Even in their current state West Ham are a better proposition than Newcastle

Manuel Pellegrini, it will be.

And who said Geordies were insular.

I still think k Ashley would have to Frak up royally for this to happen.

Further to that, I’m not even a big Rafa fan.

You'd struggle to convince me there's a massive gap in quality between Everton in 8th and Southampton in 17th last year. After Burnley it's a mish mash of mediocrity. And if Rafa got everything out of that Newcastle squad to finish 2 points above a West Ham team that was a mess, the logic would be Rafa could get much more out of West Ham.

I'd consider it unlikely but not a stunner considering Rafa was laying the groundwork to leave when Ashley was refusing to invest.

I’d rather Pellegrini, AVB or Silva. I genuinely fear it’s Ranieri, at which point I’ll be happy I’m in Australia next season as we remind everyone that Ranieri tried to kill a title winning side

Having seen all the top sides play Spurs at Wembley this season IMHO Man City were miles better than any other team. That's why the margin of their overall title triumph was so great.
I think Spurs coming third after playing "away" at Wembley was a considerable achievement, although they weren't as good as in 2016/17. Arsenal's away form was simply shocking while Liverpool have had a good season which can be considered a great one should they lift the European Cup. An awful late-winter run by Chelsea culminating in Spurs winning at St. Bridge for the first time since the American Civil War did for the west Londoners.
What can you say about Man Untd? They were second and could yet win the FA Cup. But their football was as dull as ditchwater.
Burnley's was a huge success story and Huddersfield did well to stay up and Palace's turn-around was incredible. Doubt many PL fans will mourn Stoke too much. WBA could bounce straight back.
Some think Man City will now dominate. But it's 10 years since a side won two Premier titles in a row.

Duty281 wrote:Pretty much a done deal, lad. Just waiting for West Ham to cough up the silly money.

Unfortunately, a few of you got strung along. Benitez to WHU was never going to happen in a million years.

Manuel is a good appointment, nevertheless

quite a few of my city fan mates were never really impressed with pelegrini, successful through purely inheriting the best squad. some of his signing were shocking for them demichelis being the stand out and trying to play him in midfield against messi.

not really overly impressed with west hams squad and he will need to rebuild. lanzini and arnautovic the two stand out players but can be very hot and cold.

I’ve never known a city fan who didn’t like him.

Hard to argue with his pedigree

Like Pelligrini at West Hams level, but out of his depth at City/Madrid

Why doesn't Arsenal want a proper manager? A manager with experience at managing? So far all I hear is that they are interested in Arteta and Thierry Henry, with Arteta the odds on favorite. Arsenal are also apparently saying that their transfer budget is £50 million maximum for the next season with any more having to come from player sales.

GSC wrote:Like Pelligrini at West Hams level, but out of his depth at City/Madrid

If West Ham get the Malaga Pellegrini they're laughing.

GSC wrote:Like Pelligrini at West Hams level, but out of his depth at City/Madrid

Think he got a then record points total for Real, getting 96. Won titles in four different countries, Got Villarreal a Champions League semi and finished second in La Liga. Fourth for Malaga. The only coach to take two different teams to the Champions League quarter-finals in their debut seasons in the competition.

And even better from Wiki:
Won the Football League Cup and Premier League in his first season as manager, in the process becoming the first manager from outside Europe to manage a team to the English Premier League title. The title winning season was also noted for goal scoring prowess with Manchester City scoring 151 goals in all competitions – an English football record.


I like that that is considering a record of our level!

Unfortunately, he apparently wants to see the training ground before accepting terms.

Quite happy with that good experience of the Europa League used to working under a transfer guru type.

Apart from Allegri & Sarri probably best of the options available but both seem destined for better clubs then us at the moment.

Solid choice. Feels much safer than Arteta, was pretty much on a hiding to nothing at PSG given that locker room and everything bar CL being considered failure. 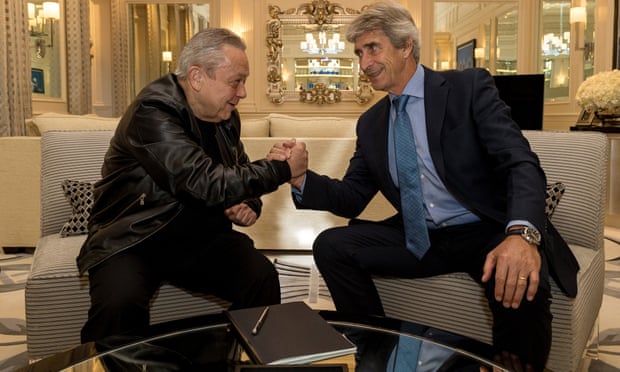 John Travolta and Dustin Hoffman are old dogs who have learned no new tricks. This summer, this wise-cracking duo will save the President in: Iron Will

Who is the creepy I can't spell diddler on the left?

West Ham appointing a better manager than Arsenal is hilarious

Stadium build would of curtailed their spending massively, at a time they need to focus on rebuilding the squad. Might be a positive in the short term, although a club the size of Chelsea needs the infrastructure & a bigger revenue stream, to compete alongside its rivals.

Short term success over long term is a bold way to do things.

Seems to be working for Chelsea.