Very good interview with Scotland and B&I Lions Doctor James Robson - looking back on his career and discussing the concussion issues of the modern game.

I don't know how he's viewed by other nations but I genuinely class him as one of the all time rugby legends, even though he's not a player.  He is always one of my favourite characters in the Living with Lions DVDs!

BBC Sport wrote:He remembers those early days like they were yesterday, a general practitioner thrust into the world of rugby, rubbing shoulders (literally) with men he had watched, and admired, from afar for years. Finlay Calder, John Jeffrey, Derek White.

As physio and doctor to the stars of Murrayfield, James Robson found it all blissfully surreal.

Last month marked his 25th anniversary in the game. Saturday marks his 199th Test as a medic - 181 for Scotland and 18 for the Lions.

If you add in all the others - all the professional club games, all the non-cap internationals and midweek Lions matches, then you're close to a thousand.

Robson is not just rugby's most admired doctor, he's also the most experienced. Six World Cups from 1991 and six Lions tours, and keen on a seventh, since his first in 1993 - he's seen some things in his time.

He recalls: "My first Lions tour - I was thinking 'Oh my God, there's Wade Dooley, there's Peter Winterbottom. Am I really with these guys?'

"After the 1997 tour [the celebrated Ian McGeechan and Jim Telfer inspired series in South Africa] I was walking in Richmond and a car went zooming past and then screeched to a halt and a fellow got out and shouted 'Robson!'

"It was Keith Wood, one of my all-time favourites. He bounced out of the car, left the motor running, gave me a bear hug and then went on his way."

Robson tells a story about his youngest daughter, Emma, who turned 18 on Thursday.

"She's an avid rugby fan, knows more about the rules and the players than I do," he says. "Because her birthday falls in June, I'm always away. I've been around for two of her birthdays. That's tough.

"Here's a good one, though. Her birthday fell on the same day as the first Lions Test in Australia in 2013. I phoned her straight afterwards. I was in the corridor and Leigh Halfpenny walked by. I said 'Leigh, any chance of talking to my daughter, she's 15 today'.

"She's mad about Leigh. He took the phone off me and wandered away talking to her and came back about 10 minutes later. It was a brilliant thing for him to do for us.

"I have two girls and I've always regarded the boys I look after as the sons I never had. My ethos is to treat them how I would want my own family to be treated."

Robson says, mercifully, he can count on the fingers of one hand the number of very serious injuries - Thom Evans against Wales at the Millennium Stadium in 2009 is the one he keeps coming back to.

"I've been doing this for a quarter of a century and I'm glad to say that the serious ones are very, very rare," he says.

"Thom was a scary moment. I still play that over in my mind. For months afterwards I'd be driving to work and Thom would come into my head. People said at the time that we saved his life or saved him from paralysis. What he had was a very severe neck injury. We got him from nose down to nose up on a spinal board. It's probably the thing we dread the most. It rarely happens, thank God."

On the concussion story, rugby's slow awakening to brain injury, Robson has been brave and consistent. Where World Rugby was initially suspicious and almost dismissive of those talking about the rising dangers of concussion, Robson stood up time and again.

He sees huge, almost seismic improvement, in awareness and appreciation of what is going on compared to half a dozen years ago when concussions were still common but the subject was treated as either taboo or a joke. There's still a distance to travel, but the journey is under way.

'Players look after each other'

"What's helped us enormously, on the medical side, is the players have started to look after each other on the pitch," he says.

"In the vexed question of concussion we have had several incidents over the past few years of players coming to the sideline and telling us that a team-mate isn't right, that we need to have a look. That's an enormous sea-change.

"Concussion is a minor traumatic brain injury, it's an insult to the brain allowing it to dysfunction for a period of time. It might be a second or it might be several days.

"Sometimes you can do all the tests, but it's the subtle stuff that's more telling. If you know your players, you can see the signs. This is where you get the argument of whether medicine is a science or an art. I think there is an art to this.

"We live with the team 24 hours a day on tour. That gives you privileged knowledge. You know their traits, you know if somebody is a little bit out of character. You won't get things right every time but what we aim to do is get things right as often as we can."

The game's protectors responded angrily. They listened to the message and then mowed down the messenger.

Robson was different. He explains: "People say, 'Oh scaremongers, they don't play rugby so why are they speaking out?' But only by people asking questions have we got to the point now where we're having all this discussion.

"On the flip side, the people who are saying that the sport is too dangerous and we're not doing enough, they're not giving us the time to allow these sea changes to come to fruition.

"We're waiting for the publication of the Glasgow University study on our ex-internationals in Scotland. England and New Zealand are doing studies on their ex-internationals and this is all as a consequence of a robust dialogue."

It has to be said that the New Zealand study, conducted by researchers at Auckland University, has hit rocky times. Last week, Patricia Hume, the lead researcher, was critical of what she said was World and New Zealand Rugby's "unwillingness to highlight key findings." Hume went on: "They just do not want us to say there is any issue at all."

Robson has deliberately stayed away from Glasgow University's study on rugby and the argument that repeated blows to the head lead to dementia. It's a truly independent study and he wants them left alone until they're ready to publish their findings.

"One of my colleagues asked me if I was afraid of worrying parents of rugby-playing kids. I said that parents should be more worried if we weren't having these discussions. If we were saying there isn't a problem then that's when parents should be worried.

"Do I fear for the game now? No. Awareness is better, massively better from five to six years ago. World Rugby seemed to be quite slow initially to drive the agenda and I say 'seemed to be' because you never knew what was going on behind closed doors.

"Now there is a far greater willingness to co-operate. Rugby's critics are entitled to ask questions but I would say to them, 'Look where we were, look where we are and by the way this is not where we want to be, we want to be as safe as possible but we don't want to destroy the game'."

In the autumn, against Australia at Murrayfield, he will be involved in his his 200th Test. Twenty-five years and Robson's love of the game, and admiration and protection of those who play it, is stronger than ever.

Thank goodness for that. When I saw the thread title, I thought he might have died.

Edited the title to make it look less obituary-like!

He seems fine until one of the recent Lions tours when he said he wouldn't allow players to be played while injured, and then several players play while injured, worsening their condition. Tommy Bowe, Ben Youngs and Tuilagi jump to mind. That made him a massive hypocrite in my mind.

HammerofThunor wrote:He seems fine until one of the recent Lions tours when he said he wouldn't allow players to be played while injured, and then several players play while injured, worsening their condition. Tommy Bowe, Ben Youngs and Tuilagi jump to mind. That made him a massive hypocrite in my mind.

Quite a bold claim to make given you were not involved with the diagnostic or treatment of their injuries, nor do you know who made the final decision and what advice the medical team gave to the coaches on each player! If you are talking about Bowe's hand injury he received backing from a specialist in Aus that he was fit to play. Corbs always had some kind of niggling injury on the go to the point that he would never have played at all for years if they were going to stop him based on those! Can't remember what Youngs had.

He as always had the interest of the players first and foremost - in the past he has regularly drawn the wrath of coaches by taking players off the pitch even though the coaches have been screaming in his ear piece to keep them on. He is incredibly well respected globally as a rugby doctor and will no doubt be named head doctor for the next Lions tour.

I'm with RDW, Robson is one of rugby's good guys.

I think it is interesting to hear him say that other players are now telling the medical teams that someone has had a bang to the head - that is very encouraging and suggests there really is a change in attitude towards concussions.

This comes at a time when Jamie Roberts has recently caused controversy when he said the recent 2nd test was a bit of a blur following his clash of heads early on, to which many people have criticised him saying he is taking concussion lightly and shouldn't have played on.

He has since tweeted a statement saying that he wasn't concussed at the time. He is obviously trying to clarify things but it hasn't been handled by him overly well it is fair to say. 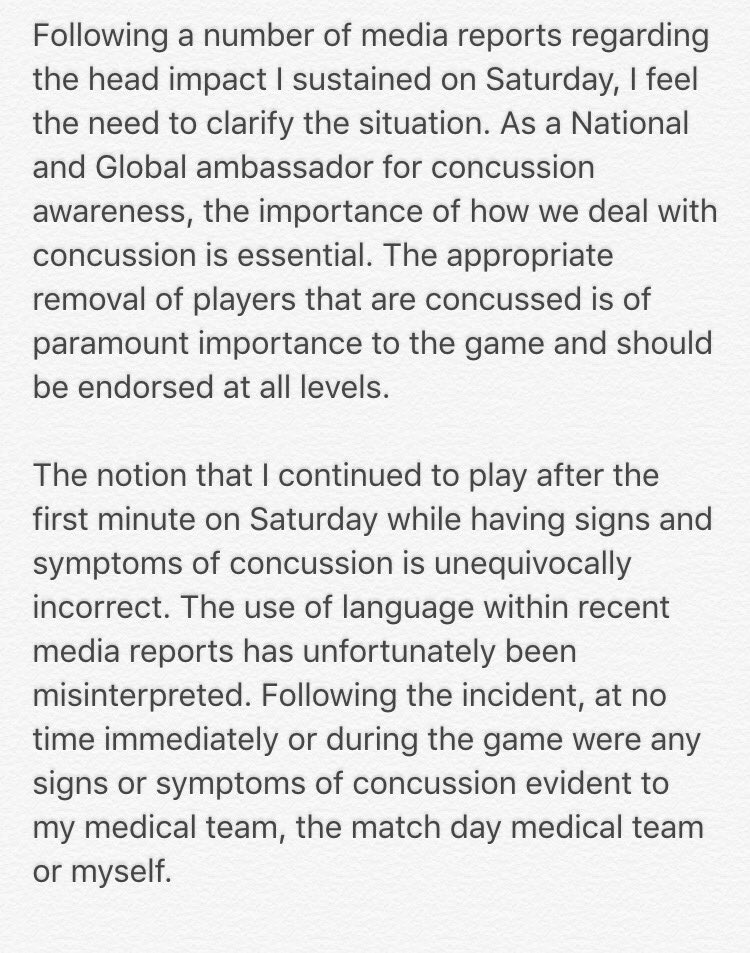 It is a bold claim, based on very little, and I doubt very much that the fella could give less of a damn about what I think

It is good that players are starting 'grass' up their fellow players. Hopefully it won't be needed for long as players realise they need to come forward themselves. For their team as well as themselves.

To be fair, I'd expect Dr Jamie Roberts to be one of the more careful players!

BamBam wrote:To be fair, I'd expect Dr Jamie Roberts to be one of the more careful players!

I'm hoping it is just a case of badly chosen words instead of anything more serious - he took one hell of a thump and if he really doesn't remember much about the game, yet played on, that really isn't a good thing!