The Loaded Dog wrote:Fooled Again! Don't Do Me Like That.

rick_dagless wrote:Leia Poppins was one of the stupidest things I have seen on film...

Ah, I know the ones, soft focus camera's, and cheesy dialogue.

Often involving Santa's children (alas, I missed the premiere of Annie Claus is Coming to Town yesterday) and/or a (Christmas) star-crossed romance. Luckily it all ends happily ever after.

I never knew Santa had Children...

I saw a good Christmas horror anthology on Netflix yesterday, well worth a watch, even if it has got Shatner in it.

Makes sense, I am sure there is a Guardian article somewhere about how Santa is a bad role model.

One of my favourite Christmas movies is It's a Wonderful Life. Favourite scene when Nick the bartender tells the Guardian Angel who asks for "a mulled wine; heavy on the cinnamon and light on the cloves"

Nick: "Hey look Mister, we serve hard drinks for men who wanna get drunk fast... and we don't need any characters around to give the joint atmosphere. Is that clear? Or do I have to slap you my left for a convincer?"

My favourite Christmas movie would be Barton Fink if it had anything to do with Christmas - in its absence I'd choose Christmas Vacation - Chevy Chase is a rich man's Will Ferrell.

Yeah, I'm the same. Chevy Chase in Fletch too where he is throwing the mini basketball through the hoop in his office. I prefer the American road trip to the European vacation for the Griswolds. I can watch some of those scenes pretty easily. My kind of humour. Dead granny on the car roof and the "My Dad says I'm the best kisser in the family" line.

The Loaded Dog wrote:Yeah, I'm the same. Chevy Chase in Fletch too where he is throwing the mini basketball through the hoop in his office. I prefer the American road trip to the European vacation for the Griswolds. I can watch some of those scenes pretty easily. My kind of humour. Dead granny on the car roof and the "My Dad says I'm the best kisser in the family" line.

It was a brilliant movie, one of my favourite comedies. The scene with the dog was good as well albeit a bit sick.

The early rick gets the bird.

Not yet, though it is "fuddle" day in work and the cake I have brought in, has been made by the wife of an elderly friend of mine, so I expect it to be at least 40% proof.

Could be an interesting day.

Gutentag Julius, seasons greetings and all that rot. All good in the Marx household? How go the book sales?

Slow, Shah, none this month. It's not about the money, it's about getting the right book to the right person, however long it takes.

And Santa baby, if all those presents
Are delivered from your sack
Then why does it take me nine months
To pay all the credit back?

When the shops are crammed with shoppers
And tempers start to fray
As far as I’m concerned, Roy Wood
Thank God it isn’t Christmas every day

JuliusHMarx wrote:Slow, Shah, none this month. It's not about the money, it's about getting the right book to the right person, however long it takes.

believe it or not I kind of get that. Reminds me of a book I read when I was a bit younger. In it the warrior comes upon an old man being set upon outside his house and saves his life. After tending to him he asks him why he has been building a boat at the top of a hill with no water body in sight. He then scoffs at the old man when he's told that he just wanted to build a boat with no intention of sailing it. You are that man I. E. Crazy and old.

Can I ask how you came to appreciate books so much that you care about them even after they've left your possession? Do you specifically pick books you care about to purchase or acquire then limit your ministrations to those books or is it any that come your way?

I built up stock by taking any books that came my way, but now I only buy occasionally - the older the better and mainly non-fiction (fiction doesn't sell well unless you sell for pennies or have a first edition of something well-known).
I just like the look and feel - and smell - of old books. The binding, the cover, maybe a hand-written inscription on the fly-leaf - they seem to have a history to them. It would be a shame if they just got binned after surviving for so long.
I'd love to run a bricks and mortar second-hand bookshop but with the internet, there's just no money in it these days.

You'd have to own the shop outright or see if you can lease something from the government for pennies. No chance of taking a small area at the local post office or in a local ticket office?

I don't think I could earn enough to pay the bills.

Egg mayo cress sandwich with a packet of spicy niknaks and a can of tropical boost. 9/10 Sandwich was made on bread just brought out of the oven and was still pretty warm. 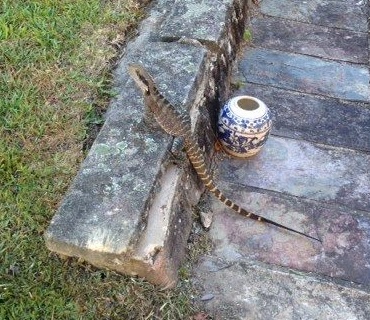 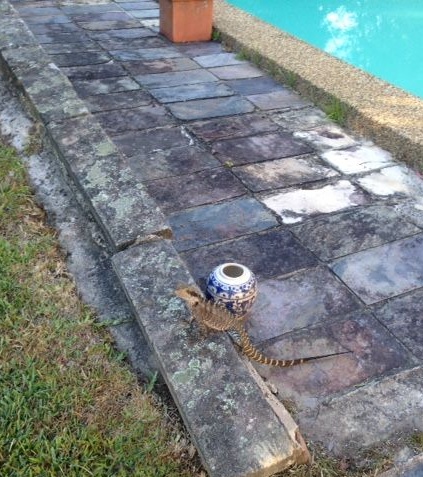 Not exactly lunch. Imaging slapping this between a couple of fresh baguettes... mayo, lettuce, cracked pepper, chilli... washed down with a Coke.

Eastern water dragon at my Mum's place. It was digging a large hole earlier on. Has a face like Stuart Broad if you look at it close up.
It's nice having a pet dragon just before Christmas.

I've named it Julius Mountbatten Marx Windsor III... although it looks pregnant, could be a she?

Would probably be more effective at bowling a good line and length than Stuart Broad.

Maybe you are being too harsh on Broad?

These lizards have a sort of early Elizabethan-reptilian face. A prominent well kept beard with sharp bits and jagged edges elsewhere.
Like a fiery adventurer or explorer out to seek riches and glory in the mid to late 16th Century... for some hidden Queen.

Or it could be a spy for France or Spain? Hard to tell...

I'm honoured, despite being lumped in with the royal family.

I'm honoured, despite being lumped in with the royal family.

I now knot said the bard.

JuliusHMarx wrote:Slow, Shah, none this month. It's not about the money, it's about getting the right book to the right person, however long it takes.

As Anthony Powell writes in A Dance to the Music of Time:

"Books are an unconvertible asset, to be passed on only to those who possess them already."

Strange but Julius seems to be absent. Would be a shame if he were to miss it

It would be a right c*nt of irony.

I have a quiz I'm doing at my work tomorrow, know you guys are always a fan of one so thought I'd let you all have a go at it...

1. In March this year we triggered which article of the Lisbon Treaty to begin Brexit Negotiations?
2. Sir Roger Moore passed away earlier this year, he starred in 7 James Bond films, can you name them?
3. The Great British Bake Off moved from BBC to Channel 4 this year, who are the two new presenters?
4. Which pop star's concert was the centre of the terrorist bomb attack at the MEN arena in Manchester this year?
5. The England football team qualified for next summers World Cup final, which 3 other nations are in England's group?
6. Who has recently been named public enemy number 1 by the BMJ for causing unneccesary GP visits?
7. Which currency is now worth around $17000 for a single coin, having started the year around the $800 mark
8. Who won the awards for both Best British Male Solo Artist and British Album of the Year at this years Brit Awards?
9. Hawkins Indiana is the fictional town setting for which hit tv show?
10. Which film won Best Picture at this year's Oscars?
11. What were the top ten UK trending searches on Google in 2017?
12. What is the name of the former FBI Director who was fired by President Trump in May?
13. What is the name of the UK's new aircraft carrier that has so far cost £3.1 billion?
14. Which MP and former International Development Secretary was sacked this year for accidently meeting Israeli politicians whilst on holiday?
15. What was discovered underground this year in Whitechapel London weighing 150 tonnes?
16. Jeremy Corbin appeared at Glastonbury this year and announced which band?
17. Youtuber Jay Swingler made headline news this year for doing what?
18. Which superheroes comprised the Justice League which was released this year?
19. Who won this year's Sports Personality of the Year?
20. Which type of dog is set to become the nation's most popular pedigree breed in 2018 eclipsing Labradors?