Jaco van der Walt starts at stand-off in the place of Simon Hickey – who drops to the bench – as Edinburgh host their first Heineken Champions Cup fixture since January 2014.

There are two alterations to the bench as Fosroc Scottish Rugby Academy graduate, Luke Crosbie, joins scrum-half Nathan Fowles among the replacements.

Ahead of the fixture, Head Coach Richard Cockerill issued a rallying cry for the city to get behind its club as they face-off against one European rugby’s most star-studded sides.

“A bumper crowd would definitely give us an edge,” said Cockerill. “We’re bringing the three-times European Champions to BT Murrayfield to play Edinburgh.

“It is, to a point, new territory for us in recent history, so I’d love the supporters to come along and get behind their city and support us.

"We’re going to try our best. We’ve always said we’re a side that’s developing, but we’re learning our lessons quickly.

"As I’ve always said, we’re going to try and win every time we play. We didn’t last weekend, but we gave Montpellier one hell of a fright.

“The next step is to start picking off these big teams and we’re going to try and that against Toulon this Saturday.”

In the midfield, Matt Scott – fresh off being named in the Scotland squad for the 2018 Autumn Tests – is partnered by James Johnstone. Henry Pyrgos is selected at scrum-half alongside Van der Walt, who makes only his third start of the season after facing Connacht and Leinster earlier in the season.

An all Scotland tight-five sees hooker and captain Stuart McInally pack down alongside WP Nel and Allan Dell in the front-row, whilst Ben Toolis and Grant Gilchrist continue their partnership in the second-row.

Good to see VDW starting, he deserves it after his impact last weekend. Just a sghame Edinburgh don't have another decent SH to come off the bench and make an impact, I am sure it will be very high on the shopping list for next season.

I know Toulon have not been playing well, especially away from home, but their midfield line still looks very scary!

VDW deserves his start but it might have been good to have him offering impact off the bench again. 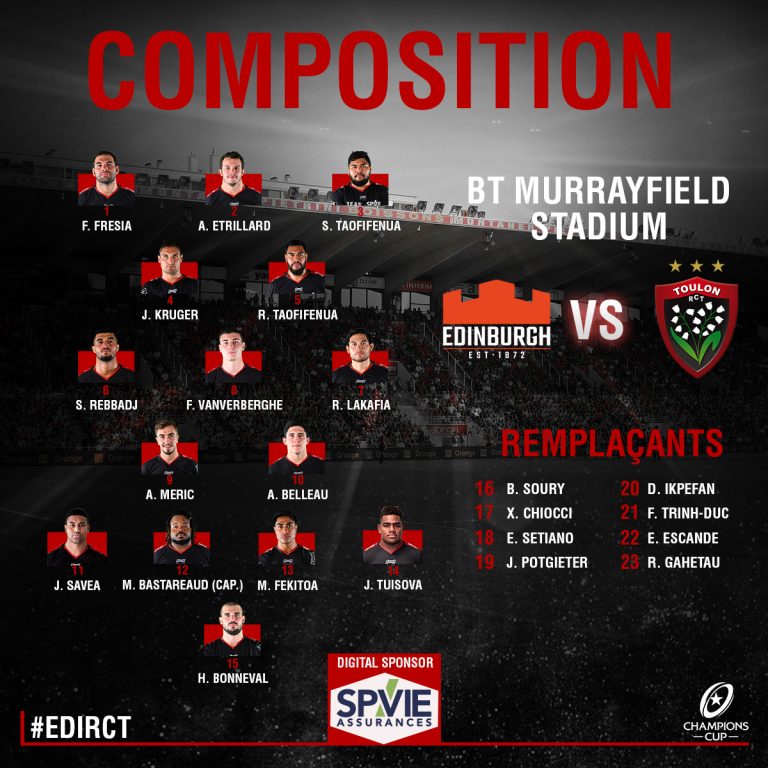 I actually think this is the weakest looking Toulon team for quite some time. Sure some big names in the backs, but recently they have all looked some way below the standards we have seen in the past.

Question for Murrayfield regulars, I happen to be in Edinburgh this weekend and since the good Scottish team will be in Wales this weekend I am going to this. I understand Hearts are playing at Tynecastle tomorrow which suggests pubs that end will be heaving. For the Library I understand the dresscode (tartan blanket, cucumber sandwiches etc) but are there any pubs that the rugby crowd tend to congregate in?

Teuchters at the West End is a great rugby pub. All the bars around Murrayfield will be full of Hearts fans!

Thought about putting a bet on this game but Edinburgh are clear 8/15 favourites - what the hell??

RDW_Scotland wrote:Thought about putting a bet on this game but Edinburgh are clear 8/15 favourites - what the hell??

Toulon have been absolute trash all season, 12th in the Top14 and losing at home to Newcastle Falcons who are bottom of the Premiership. Edinburgh should win this.

They are still Toulon though, and 8/15 is overwhelming favourites!

RDW_Scotland wrote:They are still Toulon though, and 8/15 is overwhelming favourites!

Bookies just protecting their wallets and reflecting the bets being placed.

RDW_Scotland wrote:They are still Toulon though, and 8/15 is overwhelming favourites!

Bookies just protecting their wallets and reflecting the bets being placed.

Not really. The odds were the same at the start of the week when they were first published/issued.
There's not likely to be many folk betting on Edinburgh so there's not much to protect.

Good three points, but it should have been a try!

Great break Matt Scott - should have been a try!

We've not been good at all this season in those situations. A try would have been a huge boost.

Massive blow losing Gilchrist with no locks on the bench.

This certainly isn't a classic. All the more reason why it's do frustrating we didn't get one of those early tries.

Had to be a yellow for Bastareaud!

Boy we made hard work of that

Great try, even if it took two bites!

It was actually great thinking by McInally realising it was not down then placing it back. He has a real rugby brain. How many other forwards would have managed that?

Edinburgh looking much the better team. We know they'll find a way to make this stressful though!

Bad decision to scrum again from the free kick. Just boot it!

Toulon will be very happy to play the power game, keep them running about!

Another great try, even if last pass was a touch forward, it deserved it though!

Matt Scott knows the 12 spot for Scotland is up for grabs and is doing a decent interview for it!

Elbow to the face, should be a card?

VDW kicking has come on leaps and bounds this year as well. He has really risen to the challenge Hickey has provided

D'Arcy Graham gets the turnover, brilliant!

Fife has played well too.

More white line fever, if that had gone out quickly, it was a try.

Still hard to argue with 26-7 at HT, they must be doing something right!

Hard to pick out anyone who has not played well!

I would just like to see HP move it away from those pile ups on the line a bit quicker. Still if they keep playing with this intensity, Toulon will tire and the other two tries will come.

Other than driving from 5m out Toulon look clueless!

I really really hope this doesn't become a classic Edinburgh 2nd half. A win would be great but with all this dominance it should be a BP.

Toonie must be purring in the stand. This fast offloading game is just how he wants Scotland to play, it looks like both Scottish Pro teams can do it now

This is the first time in literally years that Matt Scott has threatened to perform like the player he once looked certain to be. Admittedly Toulon look woeful.

That being said, I do vividly remember saying about Toulon circa 2013-2015, "yeah they're good, but wait til the play Edinburgh in the hostile, cauldron that is Murrayfield when Edinburgh are at home".

Great try. What a line Graham!

Bradbury has done a shoulder by the look of it. That has taken a little bit of gloss off

How was that not advantage over?

Frustrating from Pyrgos - from a turnover like that you want to boot it downfield as quickly as possible while there's no one back.

Don't fanny about setting up a ruck!

That was a knock on from Savea

Mistakes creeping in - that 22 should have relieved pressure

The back up front row has not quite done as well as the starters for Edinburgh. I think they are getting a warning now