So, how are people feeling today?

If that was a film script, no one would believe it. I watched it and do not believe it.

New Zealand did not deserve to lose that game and if ever a title should have been shared that was perhaps it. After a four year period where England have been the best one day team, winning in all conditions, it would be churlish to begrudge them the ultimate win.

To the plucky losers, don't look back in anger, and remember Kane, you're our wonderwall.

I'm actually increasingly realising just how much England winged it at the end there. There were marginal moments both ways ( including the bad wide call) but the ones that favoured England were so unusual.

The atmosphere in Lords was something else, even more electric than the Ashes 2005 victories.

All in it's been a very good world cup ( rain aside) after a tepid start. Maybe it was more engaging because England were favourites and made the final but it didnt get as much of a drag toward the end if the groups as I'd expected.
Also the new kookaburas and pitch preparation showed gave something back to clever bowlers. Its interesting just how much tactics evolved through the tournament as a result. First of it was bowl first and use leg spinners, then raw pace, then bat first, then slower balls and cutters became the most valuable currency in most games.

England didnt have it laid on a plate for them through this either. The flatbtrack bullies tag had some merit, and they have struggled more with these short chases than they had pulling back 350 plus scores in the build up to the world cup. But they adapted and handled the pressure, and showed they could beat strong bowling teams in chases even when the ball was moving.

Theyve beaten all the best sides ( except Pakistan who really deserved a semi spot as much as new zelaand did), and had to win in different ways and different conditions. They are deserved winners evening the final was a bit ridiculous and they relied on some silly laws.

So now the talk is about the legacy ( remember the Ashes?) and what a boost this is. Think of all the casual and new fans who will be drawn to the show piece event this summer....the 100.
Oh.

What channel is golf on?

It was an amazing experience only my 3rd trip to Lords and one I'll never forget.

Same when we won the 6 nations this year I guess with you lot. Here's hoping we can get to the rugby world cup final this year and you can cheer on our opponents like you did in 2011 and 2015 and the football Euro 2016 knockout stages

Mogg looking silly was funny though 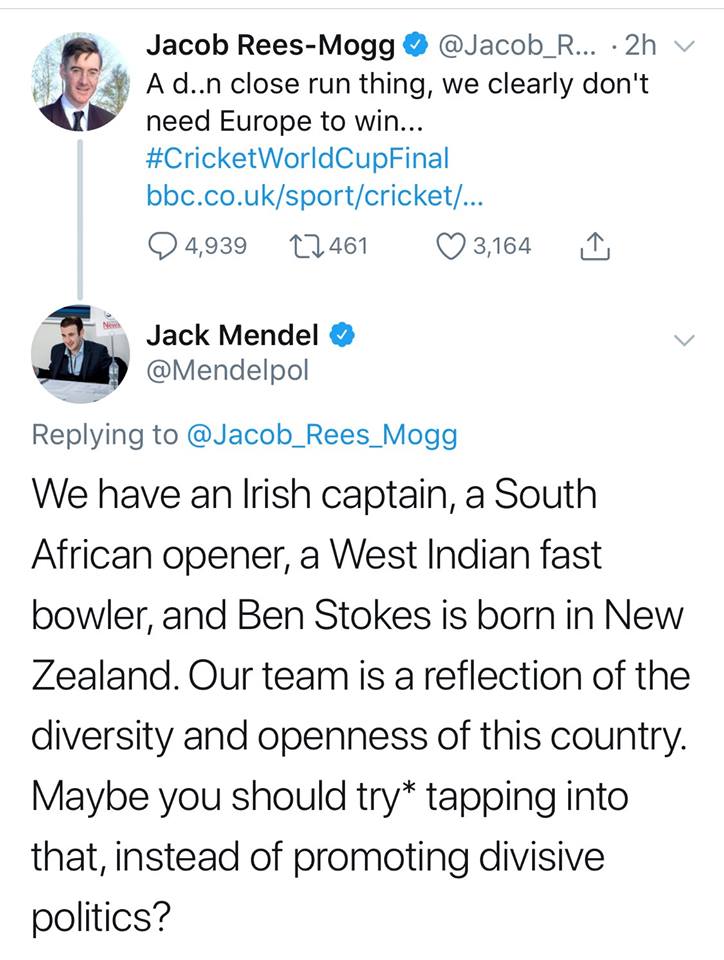 Ignoring Steffan's "input" , who's only interest is to troll on here when England win, it still feels good to have won even in that manner. That last hour, we had it won, then Buttler was out and it was lost, then it came back a bit. Boult caught Stokes and it was over, but he took one step too many back. I thought we'd win it after those overthrows, but we didn't. 15 off our over, I was certain it was enough, but when Neesham hit that six I thought we'd lost again.

Just an incredible roller-coaster finish, not something that I will ever forget

VTR wrote:Ignoring Steffan's "input" , who's only interest is to troll on here when England win

Oh come on I am sure you can take a bit of banter. To be fair the pub I watched the game in had everyone (except me of course) cheering on England. Each to their own. Perhaps English success will encourage us Taffies to try and get a team together. We got the stadium for it at least. No decent players at the moment though sadly

I don't mind it, just question you haven't been on here once until the day after England (and Wales) finally win something of note. Wales will probably never produce an overall competitive team, but have given us some cracking players, Simon Jones of course an amazing talent who had his career cut cruelly short

Steffan its the England and Wales Cricket Board. E &W C B

Which part of England and Wales is Eoin Morgan from then?

The air in his lungs.

At risk of further feeding the troll Morgan has a British passport, and is eligible for a full knighthood.

Gooseberry wrote:At risk of further feeding the troll Morgan has a British passport, and is eligible for a full knighthood.

Morgan's eligibility has never been in question. What I do question is why he ever bothered to play for us Irish in the first place if playing for England was always his goal. This is international cricket not league football where a player can just use one club as a stepping stone to another and neither does it exactly help developing cricket nations.

Wales should have its own cricket team rather than having to be a mere silent partner in the England setup no doubt about that. From what I have been told though the real enemy of Welsh cricket lays within, thus being the suits in Glamorgan CC who would rather rake in the cash from the ECB rather than help establish and international side for Wales to compete.