Well Scotland head to another almost full house at Murrayfield with a slightly mixed bag of results from the AIs so far.

A sluggish performance against Wales

A very good win against a strong Fiji

A what might have been loss against a strong SA side.

We have probably improved game on game if we are honest but so have the opposition. We will very much be looking to end our campaign on a high note.


Argentina are not SA, thery have lost their first two games of their tour, but they are no pushovers either and will no doubt still be smarting a little at the shellacking they took from Scotland down south over the summer, when they were given a bit of a lesson. However since then they have had a new coach come in, the legendary Super Mario Ledsema, who over the course of the rugby championship, had them playing back in their old style. It has been a long season for them though and it remains to be seen if they can raise themselves one last time before going on their summer holidays.

The Scotland selection will be interesting. Toonie stated that it was unlikely that anyone would play more than three games, though it was not clear if that counted bench appearences. It is also his last chance to do any tinkering and have a look at anyone. Surely in the 6N, he will be playing what he considers his strongest team.

For the squad, WC places are up for grabs and some players may not get another chance and so Scotland need to put on a good performance.

I think he will role the dice a little bit for this one, in many ways he has to. My stab at the team:

IanBru wrote:Some interesting rotation from Los Pumas. What noticeable is the number of players from those wretched performances in June who have retained their spots in the XV, or at worst been dropped to the bench. A major lack of experience at tighthead could be helpful for us. 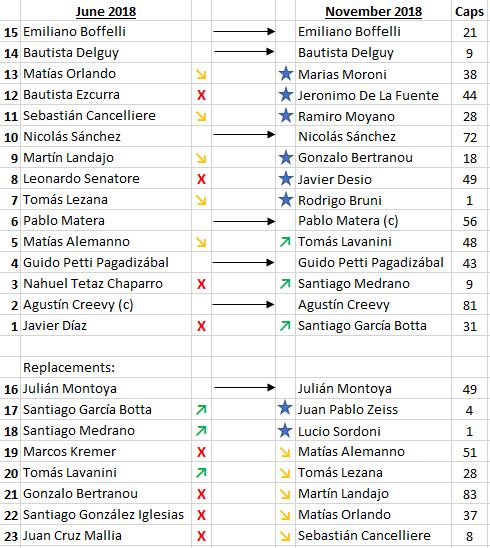 Excellent use of Excel there Bru. I'm very impressed.

Next do a pie chart of the starting XV showing those called Jeronimo De La Fuente and those who are not please.

Currently urinating down here. Could be a wet game. We'll need the forwards to be on top of the close quarters stuff

Looks damp and gloomy - could be a slippery ball.

RDW_Scotland wrote:Looks damp and gloomy - could be a slippery ball.

That’s what I said admin boy.

We’re going to need to play with a bit more structure this week. We need decent kicks for territory. If Hastings/Russell/Huw (HRH for short) have a headless chicken day, we could be under unnecessary pressure

Key stat to see we're 9th out of the top 10 in terms of turnovers differential - need Barclay back!

Much better line speed and aggression. Kicking is a bit loose though

On a different day we could be playing with 12 or 13 men on the park at the moment.

Argentina just flopped all over that ruck before the turnover

FFS they need a rocket. Playing at a snails pace, and continuous muppetry.
We've regressed 8 years.

Need some possession and territory

Think I might go paint the fence, this is awful stuff.

We need G Horne and Dunbar on.
Laidlaw and Russell need to go back to France.

You must have missed his awful up and under earlier, lucky you!

Conditions are poor but so us our kicking.

We’re putting up high balls and no one contesting. When they put a high ball up we’re struggling to catch it. If we’re going to kick, send it long and make it go into touch.

That was feckin awful

This is where we see if toonie is paying attention.

Wee Horne needs to be on by the 50th min. Russell needs binned right now with Dunbar coming on.

Thank Christ that’s over. One of the worst half’s of rugby I’ve ever seen.

One for the purists as they say.

As RDW says, this is not the day for the Russell/Hastings axis. Dunbar needs to come on at 12 and run hard and straight at them.

I think Brian Moore was spot on - if we carry on like this there's a good chance Argentina will win as this suits them better. We need to go back to what we know - we need to up the tempo noting that the weather makes it even higher risk.

Argentina have noticeably run out of steam after 60 mins in the last couple of games.

Will they be able to keep this up for the full 80, it is a tough old arm wrestle at the moment, surely it will take its toll

BigGee wrote:Argentina have noticeably run out of steam after 60 mins in the last couple of games.

Will they be able to keep this up for the full 80, it is a tough old arm wrestle at the moment, surely it will take its toll

It's been very slow though - we haven't been running them around

Kinghorn should have given that

Ritchie has played well all round.

Yay. Wilson is on. Now we’ll get go forward ball.

It's alright lads - Wilson is on!

This game should have been perfect for strauss but he's not done much.

Need Dunbar on for Hastings - he's got no control

RDW_Scotland wrote:Need Dunbar on for Hastings - he's got no control

In fairness to the lad he's getting nothing to work with.

Dreadful pass from Wilson to JG. When have we EVER seen JG knock on twice in a game?
Don't think I remember more than 1 ever.

Can we have the real JG back please?

Hastings has looked good out wider. Should we have played him at 12 with Russell at 10???

They're killing us at the breakdown. We need Dunbar and McInally on.
Fraser Brown must be knackered, he's been everywhere.

It's good that Toonie has experimented, but he needs to make sure that he doesn't repeat the bad ones.

Anglobraveheart wrote:They're killing us at the breakdown. We need Dunbar and McInally on.
Fraser Brown must be knackered, he's been everywhere.

And just like that it is so. What are the lottery numbers?

This is awful. It’s like watching Scotland of the early naughties

The ref has been really inconsistent at the breakdown today

Great vision from Laidlaw and Hoggy

Finally. Took Hogg to look up and play what’s in front him rather than letting Frodo continue down the same line again

Hogg showing his class again, the guy would walk into any international team in the world.

FFS a professional rugby team should never not be back 10 at a lineout!