Edinburgh vs Cardiff Blues
Location: BT Murrayfield (on point with my sponsorship game)
Date: Sat 23rd Feb
KO time: 19.35
TV: One of the prem sports channels (you all know the situation on this by now)

In some amazing scheduling, Edinburgh play Cardiff just hours after Scotland play France and even shorter after Wales take on England.

Teams:
Edinburgh -  will be shafted, we've lost half our team to the national side, along with injuries.
Cardiff - I believe are not as badly impacted by call ups, so might be able to field a near full strength team

it really isn't ideal that one of our most important games of the seasons will come with significantly reduce players available, playing after a full round of 6N fixtures so probably won't be a big crowd. It's not just those directly playing for Scotland be we'll probably lose a few that are travelling with the squad to cover last minute injuries. The Blues will have players away too but won't be as badly affected, plus they've got a top class core of NWQ players to rely on.

We simply must win this - Treviso have a pretty decent run in and have Dragons at home next, which may be 5 points. Given that we're level on points and still have to play Treviso away we can't fall behind.

Competitive, but also the players who have lost to Zebre, Kings and Dragons this season. We'll likely get Dean and Johnson back though.

One things for sure is that it is likely going to be a high scoring game given the Blues Glasgow game at the weekend!

Dean's not been called up, so he's definitely going to be here, unless he's also injured, which at this point wouldn't surprise me.

I don't think this game will be as high scoring, we play a far lower risk game than Glasgow and also have some defensive ability. Still need to watch out for a few Cardiff players though. The big lad who got the hattrick against Glasgow is a concern.

Dean was called up for the last round of games, and they usually say when players have been sent back to the clubs?

My apologies, totally missed that. Well I think we can safely say he'll be available.

Lewis Wynne might be still about to cover a bench slot, although i think he's back at Lon Scottish now.

I think you will get Dean back, not so sure about Johnstone though. He is well in the running for the Scotland 13 shirt.

Gatland could do you a favour if he pulls a few of the Welsh internationals back, Jarrod Evans in particular, who was very good against Glasgow.

I can't see Edinburgh playing chuck about, the way we did though, that game suits Cardiff as well. If they stick it up the jumper, they should have the muscle to grind it out upfront.

Is Premier Sports a SA channel??? It seems that the majority of the games on the free channel include one of the SA sides.

Don't be mean and pay a tenner a month then!

I'd guess that Prem Sports isn't a SA channel as they show the least popular games for free and make you pay for the ones people want to watch.

Don't be mean and pay a tenner a month then!

I would but I'm hardly at home at the weekend so a bit pointless.

Plus they are Irish!

With the Sco team now announced, and assuming the players not picked aren’t travelling subs, then I think the Edinburgh team should look something along these lines:

Chris Dean has been picture checking in for the trip to France so looks like he's not playing.

Socinio will play 12 for edinburgh then I guess

Where's Andreas Strauss when you need him?

Johnstone not in the match day squad, so you may get him back.

Just saw a video of Scottish team arriving in Paris.

Henry P was on the plane, so he won't be playing unless they are going to fly him back on Saturday

It really is going to be a huge ask for us to win this game.

Bugger. Fowles or Kennedy to start then. Given he's been benching the last wee while, I assume Fowles

I had completely missed that this was happening! Tough scheduling. The pack will be fine, but the back line may be slightly scratch. Fowles getting a start is fine. Pyrgos was poor in the last game and we need to keep our reserve 9 match fit.

funnyExiledScot wrote:I had completely missed that this was happening! Tough scheduling. The pack will be fine, but the back line may be slightly scratch. Fowles getting a start is fine. Pyrgos was poor in the last game and we need to keep our reserve 9 match fit.

No! Fowles can bugger off!!! 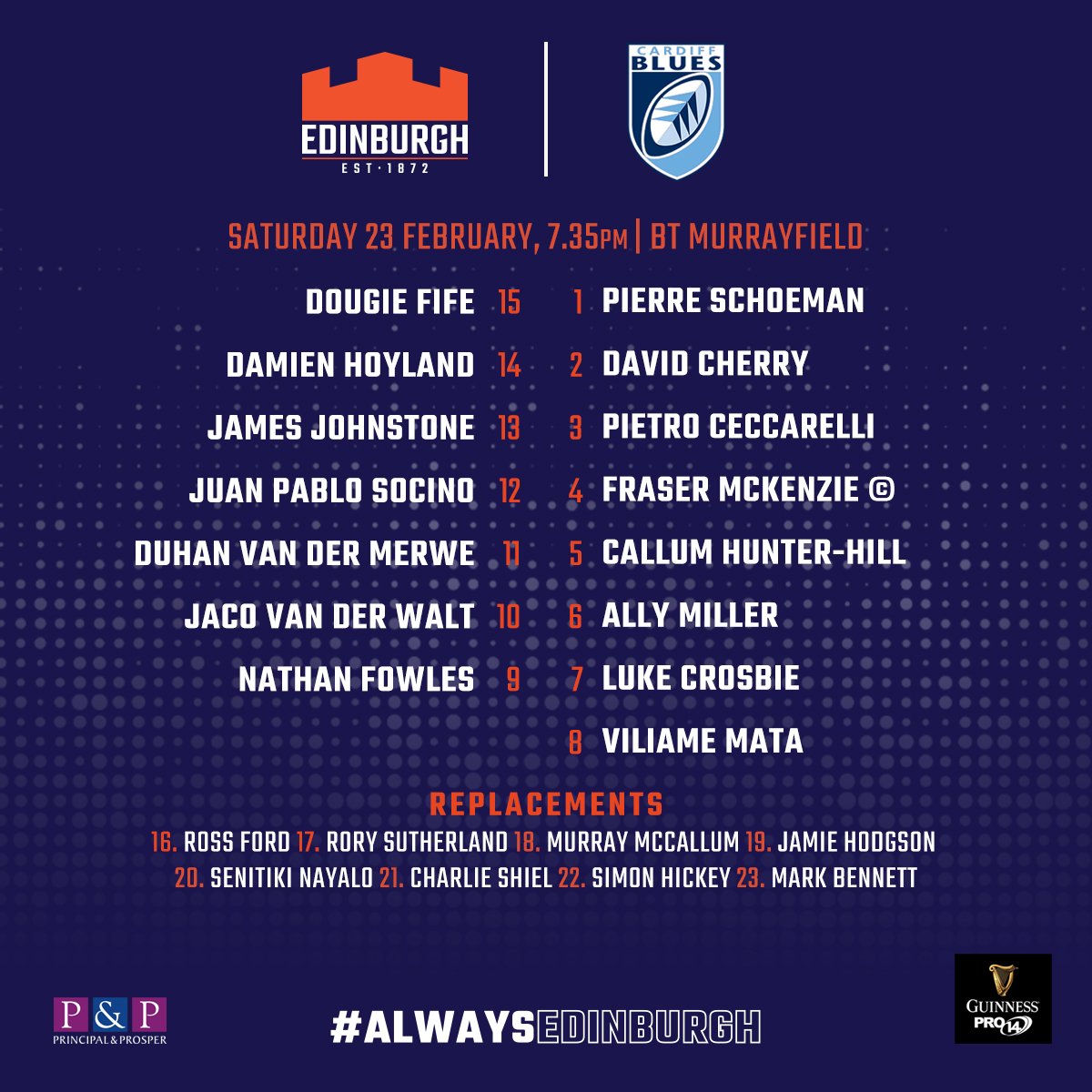 Bennet's back! As is Hoyland.

I'm worried about this one - will be a huge result if we win it.

The inclusion of Hoyland is one of six changes made to the side that defeated Dragons at BT Murrayfield as Edinburgh aim to continue their unbeaten record at home in all competitions this season.

Ahead of the fixture, Head Coach Richard Cockerill, said: “We’re missing a few more bodies this week due to international call-ups, but we have a strong desire to win and the capability to do so.

“These games are all important in the run towards the play-offs, so I’m expecting the boys to leave everything out there in order to get the right result.”

In the front-row, prop Pierre Schoeman packs down alongside Pietro Ceccarelli and hooker David Cherry, whilst skipper Fraser McKenzie links-up with Callum-Hunter Hill in the second row.

Nathan Fowles and Jaco van der Walt will pull the strings at half-back, while last week’s double try scorer James Johnstone lines up alongside Juan Pablo Socino in the midfield.

Recent Scotland call-up Dougie Fife has been released by the national squad to start at full-back and is joined by wingers Duhan van der Merwe and Hoyland.

The capital side also welcomes back Mark Bennett who is named amongst the replacements - the centre has been sidelined due to injury since the game against Ulster at the Kingspan Stadium in September last year.

Good side. Still annoyed about McCallum not getting the start. Got to think that Kennedy may get one more year purely thanks to the World Cup.

Great to see Hoyland and Bennett back though. They both add to the 23 when in form and Edinburgh will need that for the run-in on two fronts.

He's not the messiah, he's a very naughty boy!

Very pleased to see Hoyland back. As you say RDW, a win would be massive here.

Don't think I'll watch this tonight - I don't think I can cope with more disappointment!

I might hsve to cheer myself up by watching my recording of Glasgow game!

Decided to watch this game, hope I don't live to regret it!

RDW wrote:Don't think I'll watch this tonight - I don't think I can cope with more disappointment!

Just came here to say this had better not turn out to be more pish rugby! Fingers crossed...

And Fowles...... just scored a try off an awesome Cherry break!

Decided against better judgement to watch this!

Who is the other bloke co commentating with Barclay?

RDW wrote:Who is the other bloke co commentating with Barclay?

RDW wrote:Who is the other bloke co commentating with Barclay?

Didn't recognise him at all - didn't know he was so high pitched! Must just be nervous.

Hang on, Fowles seems to be having a decent game!

VDM almost put the game away there!

Credit where its due, he is playing well

A howler from Cardiff

Shame the kick went dead - Blues were in trouble