This from the official tournament website which is interesting reading as it's based on official statistics and not our usual preferred criteria of lazy received wisdom, jingoism or blind prejudice: 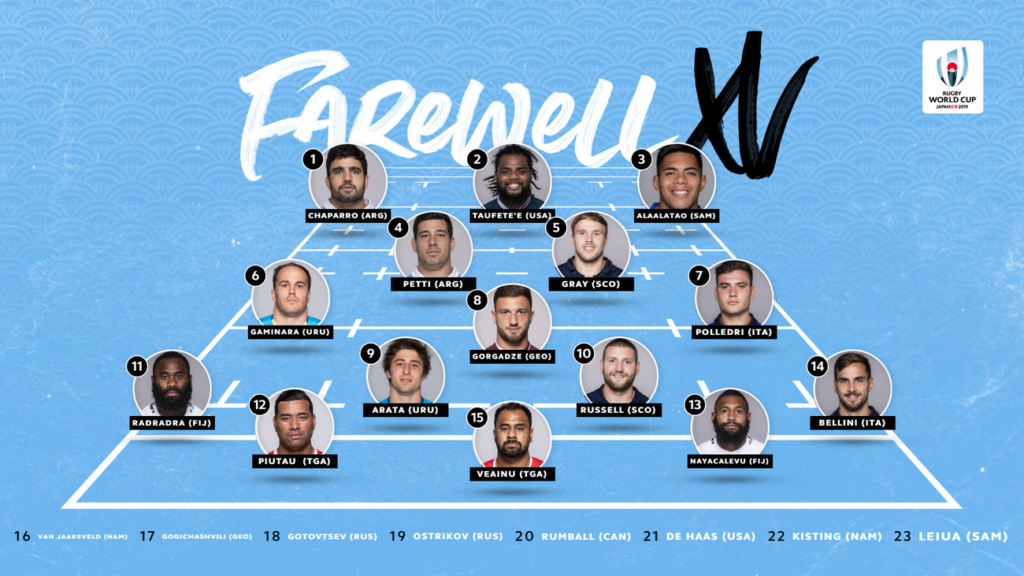 EXIT POLL: A TEAM OF WINNERS FROM THE DEPARTURE LOUNGE

Our statisticians have pored over the pool-stage data to bring you the finest XV, plus replacements, from the 12 eliminated nations.

TOKYO, 15 Oct - Their teams failed to qualify for the quarter-finals but these players still covered themselves in Rugby World Cup glory according to our team of data gurus.*

Tetaz Chaparro made more carries and tackles per minute than any player playing 50% of his team's game time in the pool phase - showing a level of stamina and commitment few loose-heads possess.

Taufete’e showed remarkable staying power in clocking up 244 minutes during the tournament, topping the hooker carries chart with 37, while he was third on tackles and turnovers.

Completing a durable front row is the 128kg tight-head, whose 39 tackles puts him second on the list of No.3s. Alaalatoa, whose brother Allan is in the Australia squad, also had the second-most turnovers of any tight-head.

The second-row's numbers speak of a top-class all-rounder: 70 metres made (third in his position), most lineout steals of any player (5), second in second-row turnovers, third for defenders beaten.

A renowned tackling machine, Gray's 28 against Japan was a tournament high. But with 14 passes and a third-place ranking in his position for offloads and try assists, the Scotland second-row is so much more.

Not only did Uruguay's captain play a key role in the shock win against Fiji, he also made 52 tackles in the pool stage, the third most by a blindside flanker, despite starting the match against Australia on the bench.

Polledri’s barnstorming performances included beating 27 defenders, the most recorded in any Rugby World Cup by a forward, despite playing just 196 minutes.

A worthy successor to the similarly named Mamuka Gorgodze as Georgia's go-to go-forward man. He made 149 metres, as well as the most tackles (38) and turnovers (5) of anybody in his position.

Tackles (38), defenders beaten (6), turnovers (six), the Los Teros scrum-half had it all, proving key in the win against Fiji. He's got a decent boot on him, too...

Third-most metres made (126), second-most defenders beaten (11), third-most clean breaks (4) and most offloads (6). Impressive fly-half numbers in a Scotland team that was not always going forwards.

Metres made (400), defenders beaten (29), carries (62): Semi-trailer topped all those categories. Throw in six tries and two Player of the Match awards and his figures, and performances, were simply breathtaking.

He will be remembered for a try-scoring farewell to international rugby against USA, but the Tonga captain's tackle count was most impressive, 42 the most of any inside-centre.

The leading outside centre in metres made (219) and clean breaks (5), Nayacalevu also scored tries against tough opposition in Australia and Wales

A breakout tournament for the tall winger, who made 160 metres and seven clean breaks in just 120 minutes of rugby, scoring a try in each of his games.

The leading full-back in metres made (248) and tries scored, including this beauty, below, against Argentina. Say no more.

* No more than two players could be picked from any of the 12 departing teams and all of them had to be represented at least once in a squad of 23.

I wonder how they flex the stats for the different positions. After all we should be using different metrics for a hooker vs a full back.

George Carlin wrote: it's based on official statistics and not our usual preferred criteria of lazy received wisdom, jingoism or blind prejudice:

Jake Polledri - whats the story with him. Was he born in England to Italian family?

I wonder if he is happy with his decision to play for them over England?
Curious one. England certainly missed some player there though. Although we do have some serious competion coming through the back row ranks now.

It'll be fasincating to see how some of these teams like Uruguay etc progresss over the next 4 years. Maybe there'll be a few others like Kenya etc.

GeordieFalcon wrote:Jake Polledri - whats the story with him. Was he born in England to Italian family?

Born and raised in Bristol. I assume Italian family on his dad's side with that name. He seems to be one of those guys who did not attract age group or academy (in and out of the Bristol setup) interest so played for Italy U20s in the 2015 JWC. I like these later developers as sometimes they seem a little hungrier.

You'll have to settle for being the world no.1 in that case, Fly. Chin up, squire.

You'll have to settle for being the world no.1 in that case, Fly. Chin up, squire.

Ireland aren't number 1 any more and haven't been for a few weeks. The rankings are being updated each week, just getting very little attention because there's an actual tournament going on.

Ireland dropped to second before they played Japan (despite their win against Scotland) and have dropped to 4th since their loss to Japan.

The quarter finalists all make up the current top 8 although this is somewhat of a self-fulfilling prophecy, as Japan have squeezed up and past Scotland with their victories over Ireland and Scotland. Had they lost on the weekend, they would have been in 9th and Scotland would have been in the top 8. Similarly, if Argentina had beaten France they'd probably have their spot etc.

Assuming no 16+ point wins this weekend:

Ireland could go to top this weekend, but they'd need to beat NZ and hope both England and Wales lose. I'm sure they'd take beating NZ, sliding into third and then aiming to get top spot a couple of weeks later though.

Not much movement to be had if all the favourites win, other than South Africa leapfrogging Ireland into 4th to make a full house of semi-finalists. If all the pool winners win, Japan will rise up to fifth despite a first semi-final for them. France are the only other who cannot break into the top four with a small victory.

I think assuming no 16+ point victories is a stretch. Could easily see all 4 winners - let's hypothetically say it's NZ, SA, Wales, and England - winning by that margin.

I was watching The Breakdown (NZ version) earlier and the pundits Jeff Wilson, Ali Williams, John Plumtree and two others I can’t remember, were discussing the best team to go home. Conclusion was Fiji and hopefully in a few cups Tim they could be Semi Finalists...! Not improbable. Bar the slip up vs a very talented Uruguay team Fiji were superb.

Agreed Fiji were probably the best team knocked out. Just pip Scotland and, perhaps on par with, Argentina. Georgia massively disappointing all things considered bar the Australia game, where I think they did ok, but given the circumstances Australia were coasting. Difficult group for them, didn't suit their style, and Fiji stole their thunder as the third best team in the group. Clearly not 6Ns quality if anyone was in doubt.

Similar topics
» Who is the best teams outside the top 9 IRB international teams
» Good teams push other good teams to be better
» Should there be a quota imposed on how many games top teams should play vs the lower ranked teams
» Tuck rule eliminated , leading with crown rule enacted
» If NFL teams were soccer teams who would they be???