Hopefully the concept will be easy to understand. What this will show is how the teams are compared to the last time they played the same fixture.  It is so we can see who has improved and who is struggling.  For teams that only play once a year the result is from as far back as 2 years ago.  For teams who play 3 times a year it is their last 2 games from last year.

In 18/19 Glasgow beat the Cheetahs but this year they lost so cheetahs are doing better and scoring more while Glasgow have alot still to do. It means if they are to reach the sames points total as last year they will need to win some of the ones they lost last year.

I know its a world cup year but thought it might be a bit of fun.  I have shown the results for each round

How many league points are teams up or down compared to last time they played.  Did you pick up or lose a BP 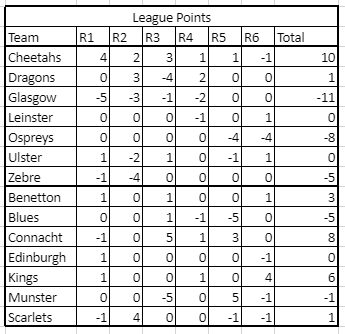 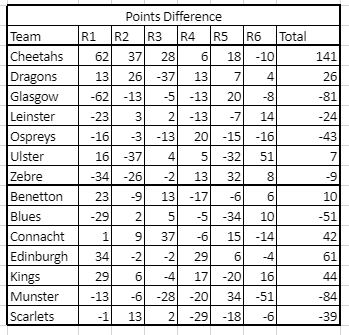 Points scored by teams.  The more points you can score the better chance you have of getting more league points 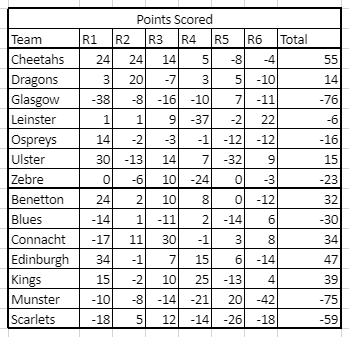 With points differences Munster are not doing as well as last year which could cause a few wins to become losses. Cheetahs really have improved on last year even away from home.

Munster also scoring less points per game aswell (I know they had players at the world cup but so did others) Kings scoring more so may turn some of those LBPs in wins this year.

So while some teams like Glasgow will improve as the season goes on they have 11pts to make up on last years total while Leinster are as you were.

It feels a bit like the WR rankings. The higher up you are and more consistently good you are, the less you do in the numbers department. You just wait for others to catch you as you can't get many positive point hoists from any of them.

Looking at those columns, your mind tells you Leinster are shyte this year !

Not scoring as much but to be fair their first team was at the WC. We will see how Leinster get on next year after the Black Friday sales being held by the IRFU to the other provinces. You'll get 50 Leinster lads starting one league weekend yet.

I thought Dragons and Scarlets were both doing better than the previous year but both are only 1 point up in terms of league/log points.