World Rugby wrote:In an effort to improve the excitement of rugby games and increase its global appeal, World Rugby have appointed Simon Cowell to implement a new points scoring system where points for tries are given based on how flamboyant and entertaining they are.

Once a try has been scored the game will stop and the broadcast will switch to a live panel of judges who will provide comment on scores, then ultimately give it a score out of 10. The average will then be given as the points awarded for the try.

Rumours are that the panel will be made up of flamboyant rugby players of the past, choreographers and showbiz celebrities. Shane Williams, Louis Spence and Craig Revel Horwood are rumoured front runners.

Revel Horwood, from Strictly Come Dancing, said "I think it is a fabulous idea dahling, rugby really needs some more razzle-dazzle to spice things up. Who doesn't want to see a skip, jump and twirl on the way to the try line?"

These new rules are causing panic in some teams, with the Welsh rugby union apparently hiring Anton Du Beke as   a specialist consultant. Warren Gatland said "we have a bit of a reputation of being a boring team, so it is time we changed that. Ola Jordan was originally brought in, but the players found her far too distracting. Mike Phillips also threatened to come out of retirement to 'work' with her so that was the last straw - she had to go."

There is some opposition to the move though, with the Front Row Union particular aggrieved. Irish legend Peter Clohessy - PR spokesman for the FRU - provided comment but no one could understand what the hell he was saying. Something along the lines of "ah feck yeh yeh bunch of feckin eejits what a load of feckin shoite". A translator confirmed what he was trying to say was that their biggest grievance is that scrum and maul tries will be judged harshly.

Supporters of the move include Stuart Hogg, who recently admitted that 99% of what he does is for the cameras, and his flick over the head pass to Tim Visser wasn't actually required, but was done 'for the gurlz'.

It remains to be seen how this will work in practice, but World Rugby are confident it will take rugby into a new era.

Yeah, much the same as this appointment

Having lifted the trophy with Glasgow Warriors less than 12 months ago, the former Scotland international second-row will once again be involved in the showpiece event on Saturday 28 May 2016.

Kellock has followed the trend of retiring professionals who have moved into refereeing, such as former Warrior Mike Adamson and New Zealander Glen Jackson.

Since retiring as a player last May, Kellock has undertaken rigorous fast-tracked training behind the scenes to become a referee and having passed all mandatory assessments, including a vigorous eye assessment at Specsavers, Kellock is now ready to take the whistle in professional matches.

Having refereed at grassroots level over the last few months, Kellock is set to take charge of a number of GUINNESS PRO12 games over the next two months, across all four competing nations, ahead of the Final in May.

“It’s been a long, hard few months to get to this stage but I feel I’m now ready to give something back to the game and a competition which is so close to my heart.

“I’ve been trying to referee games for the last 20 years and following my retirement as a player I felt this was the next logical step in my career.

“My mentor Nigel Owens has been very supportive and encouraged me to pursue this new career move. On the pitch he has all the chat but hopefully one look from me will keep the players in order."

GUINNESS PRO12 Referee, Nigel Owens said: “Whilst I’m disappointed to miss out on the Final, I couldn’t be happier for Al and I think he’s the perfect fit for this showpiece event.

“It’s great to see retiring professionals stay in the game and give back to the sport and hopefully it’ll pave the way for others to follow suit.”

“He is highly regarded in the game and as a former captain of the defending champions, he understands what it takes to perform at the highest level.

“We have no doubt his professionalism as a player will translate into his new role as a match official.”

This is Frak ridiculous. What the hell are the thinking? On was on the verge before, but that's it. I'm done with rugby, so long and thanks for all the fish

I'm going to struggle to separate the fools from normal postings this morning.

Edinburgh would do well out of a system like this.

As anyone has ever been there will tell you, there's more mince in that town than in a chain of Texas abattoirs.

George Carlin wrote:Edinburgh would do well out of a system like this.

As anyone has ever been there will tell you, there's more mince in that town than in a chain of Texas abattoirs.

Problem is, the majority of Edinburgh's tries would be lucky to get 1 point!

Come off it? Given how well groomed we are over in the east we would rack up pints by the bucketful

TJ wrote:Come off it?  Given how well groomed we are over in the east we would rack up pints by the bucketful 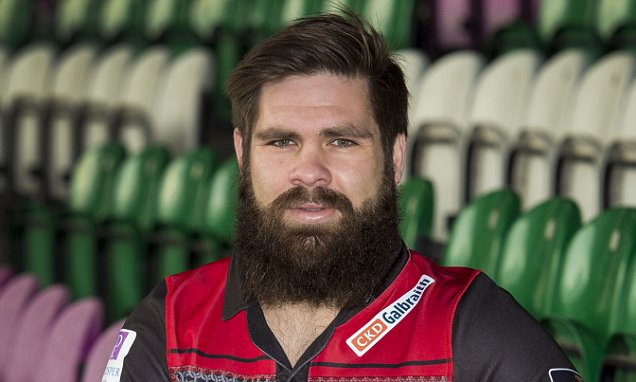 Kellock would be a perfect ref. Standing around staring at rucks and shouting at people. He's made a career of it.

As for the new points system, there's only one team in Scotland that puts style over substance. I fear that our 1872 crown could be in jeopardy, although perhaps Cheryl Fernandez-Cole-Versini-[insert name of 3rd and 4th husband] will rescue us with a controversial decision in a Geordie voice that Bru will have to translate for us.

Can we have a live scoring system for April Fool jokes?

Gooseberry wrote:Can we have a live scoring system for April Fool jokes?

funnyExiledScot wrote:Kellock would be a perfect ref. Standing around staring at rucks and shouting at people. He's made a career of it.

I really think that he should seriously consider this!

To assist Al,why don't we get Stanley Baxter to be his TMO and use Parliamo Glasgow to explain his decisions.Better still,let's get all the PRO12 TMO's to talk Parliamo Glasgow,one of the great unsung languages of the world.

Na - use Dan from BBC alba!

Oh Dear................. and just when England were beginning to look really good too.
A new rule once again surfaces to drown them.  It really is a conspiracy when you look at it seriously.

I'm sure Eddie won't lie under it though, like I feel sure Lancaster would have.  No, Eddie will come out all guns blazing against this new Cowell trial.  He'll argue that such a trial will force him to recall Chris Ashton, and that of course would be World Rugby virtually imposing a player selection policy on a legitimately employed International coach.

Scandalous really, but then it's what we've come to expect from this shower!

You must mean Hugh Dan MacLennan,that man of the Camanachd and the bard of Gaelic.I've always seen HDM as a very fair commentator though his excitement at Tommy Seymour's recent try against Ulster bordered on the passionate!!

You must mean Hugh Dan MacLennan,that man of the Camanachd and the bard of Gaelic.I've always seen HDM as a very fair commentator though his excitement at Tommy Seymour's recent try against Ulster bordered on the passionate!!

Thats the chap! I love his commentary. Must be really odd for him as he has become almost a cult figure in Scottish rugby