Great win for the 5"7 Schwartzman. Good to see the little guy succeeding. Never going to do anything off clay but a decent claycourter.

However, the real story here is the way the match finished. Dimitrov had a total meltdown after breaking a string for the fifth time in the match and deliberately defaulted the match by totalling his racquet. What a guy!

DIMitrov is going backwards and clearly he knows it, hence the frustration spill over. This isn't the first time...did anyone see his racquet smash vs. Murray at AO...that was almost the GOAT of power racquet smashes.

I can understand the frustration, he was a set and 5-2 up but then let Diego back in the match and it went pearshaped after that. But his reaction was disrespectful to Schwartzman by defaulting the title to him.

Perhaps if he focused on honing his tennis skills rather than trying to be the next Vitus Gerulaitis he would do better. Anyway, maybe this incident will be the watershed to get him top 10 focused again because right now he's a (relative) waste of talent. And to think Eurosport tennis critics had him down as #1 ranked player by 2018! Note I didn't say experts! (although it was partly compiled by Rusedski, Wade, etc...). 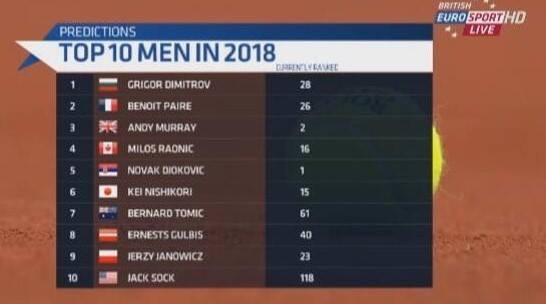