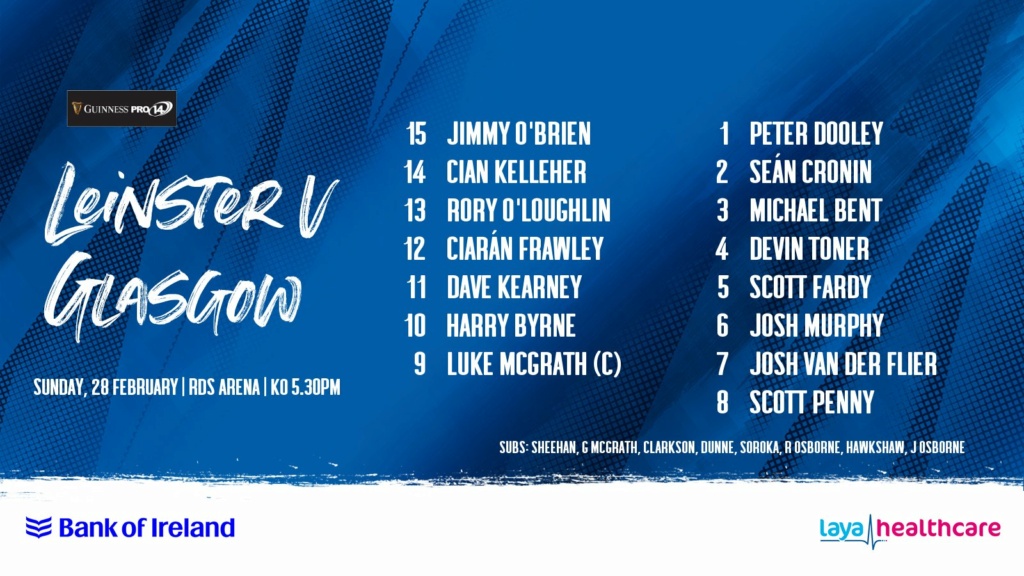 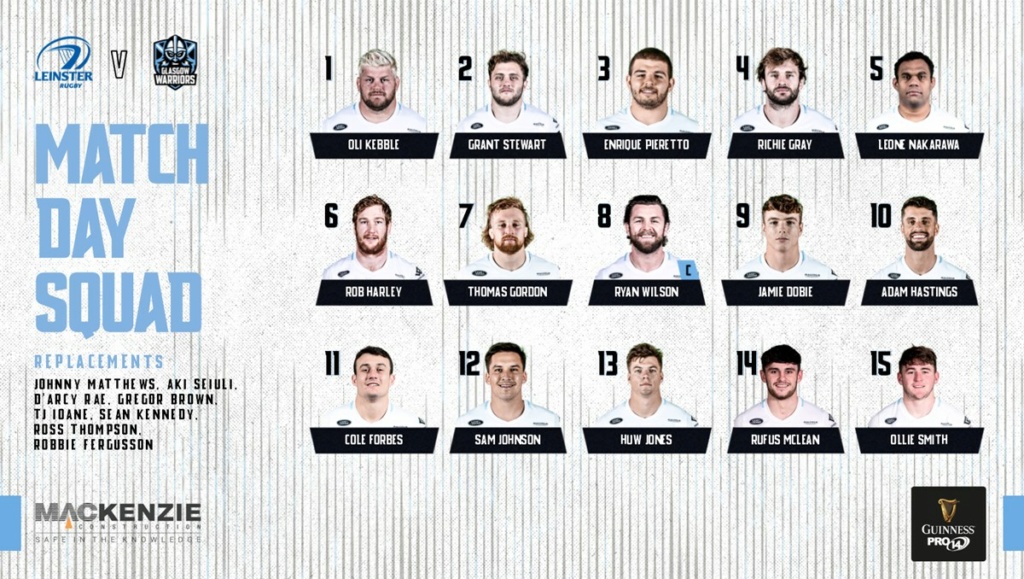 He has been very impressive, only 19 as well

Ulster will be cheering on Glasgow big time.

BigGee wrote:How many penalties did Leinster give away down the other end and they did not get a warning!

I thought that too - and it included 2 no-arm tackles which is dangerous play.

Ooh knee to the head?

No way. I thought Leinster player was at fault and facing a possible red and then there was a yellow card to TJ Iaone for the cheap shot. crazy match.

That was a cheap shot, despite the fact that the Leinster player had already given the penalty

Ioane not doing a lot to extend his contract next season atm!

Should have been a yellow each - shocking TMO

Hawkshaw doing well as stand in for Harry Byrne. Pity about the kick.

Good try but just a lack of numbers really

I think the Leinster player got lucky as his knee missed the Glasgow player on the deck. Otherwise yes, yellow each.

Lovely sideline try.   Was there a problem before that with Glasgow winnng the ball?

One of the paradoxes of rugby, that retaliation always cancels out a foul!

bsando wrote:I think the Leinster player got lucky as his knee missed the Glasgow player on the deck. Otherwise yes, yellow each.

Yes his knee did miss the head.

Glasgow could get TBP and LBP still.

Pot Hale wrote:Glasgow could get TBP and LBP still.

Not so sure about that!

Still, all things considered, I am not distraught and there is some hope for us if we play like that a bit more regularly next season

Two turnovers from Gregor Brown tonight in his cameo. He's pretty sharp too!

Pot Hale wrote:Glasgow could get TBP and LBP still.

Not so sure about that!

Still, all things considered, I am not distraught and there is some hope for us if we play like that a bit more regularly next season

15 players and I’d give the game to Glasgow. Very strong powerful plays and good offloading.

Well it wasn’t for want of trying from Glasgow.

Good game from both sides.  Shame about cards.  Commiserations to Glasgow.

Well done Leinster, still the side to beat

Despite the scoreline i'm actually quite heartened by that performance - we coughed the ball up at key moments and our discipline let us down, but we played really, really well for large parts of that.

Lots of good play from a number of players, but I was hugely impressed by Gregor Brown - exactly what the Glasgow backrow has been crying out for.  I'ver never seen him play or really know anything about him, but he made constant yards every time he got the ball and was a ball of energy - delighted we seem to have somebody who is ready to step up there.

Now that the dust has settled.....
Firstly, Ladyboys fans thank you. It's good to watch a match and have intelligent, humorous banter with the opposition without it descending into Sonja McLaughlin territory.
Secondly, there are some good youngsters coming through for the Dubs; I really liked the look of both your 10's.

Glasgow; the back three were all exciting to watch. Titman just wants to attack every time he gets the ball. Ollie Smith looked good, he was very unlucky to lose his footing in the first minute but seemed to shake that off and played well. The Cole Man gave away about four penalties, but we'll put that down to over exuberance on his debut. He does like to run hard and fast and looks like a good player, when he settles down. Or tunes into the idiosyncrasies of NH refs.
Johnson-Shug were possibly the best centre pairing of the season (mind I can't remember how long this season has been going on for). Both could have played themselves into contention for the Irish match.
Is Haircut's last action in a Glasgow jersey that stupid red card? Stupid from him not the ref. He'll get a ban and probably won't play again this season. The backs actually played better once Thomson was on!
The House Elf had an assured game. Interestingly he didn't try to run the ball once. It seems Toonie asked DW to play Shug at 13 in case he needs to play there for Scotland next week: I wonder if Dobie was instructed not to show too much of his running game and save it for when he comes on against Ireland? Perhaps Dobie took one look at the Ladyboys back row and thought, "Best not be too ambitious tonight".
In the back row The Mullet was superb. Fourth best 7 in Scotland terms behind; Hamish, Mbawza and , obviously, Chris Harris. Batman was Batman, "Ryan, don't do that". Made me chuckle. Big Bad missed four or five tackles in the first half and looked off the pace. I think he had a hooded guy carrying a scythe sitting on his back which must be slowing him down.
After that performance Nak Naks should be paying us. Big Ritchie looks more like his old self every game.
Still can't see what Pieretto brings.
At 28-21 and the ref signalling a Glasgow penalty at the breakdown I really thought we were about to see something special. TJ Ioane!!! Hang your head in shame.
Still, in Sam Becket's home town it's usually More Pricks Than Kicks but just for a few seconds it looked our poor run would end, Godot would arrive ....but then the Endgame.
Still, as Becket said "Ever tried? ever failed? Try harder, fail better."