I have a secret, wildly unpopular, opinion about the laws of rugby. I believe that jumping to catch should be outlawed.

Hear me out. Myself and World Rugby agree on one thing - it is incredibly dangerous. My argument is that the laws, and the cards, and the citing are NOT achieving increased safety in this area.

Take the below all too common example. The current laws state that when a player is airborne, anyone who interferes with them, unless equally airborne (same height - same chance of catching), is responsible for the other players safety.

To me, the player who chooses to jump, is the player willingly putting themselves at risk, and it many cases the player at 'fault' can do very little about it.

The current rules say - unless you want carded, you had better jump also and accept the same risk as your opposite player.

This is nonsense in my mind. And if World Rugby really want to eliminate the risk of a player landing on their head/neck - they can only do this by outlawing jumping to catch.

Where the two players were running from. 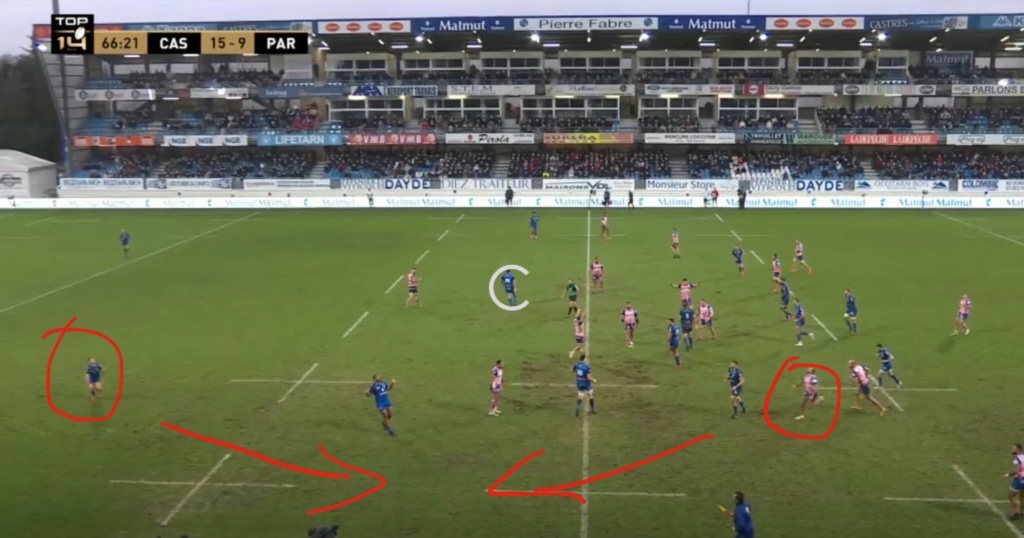 The moment where one player begins to leave the ground. 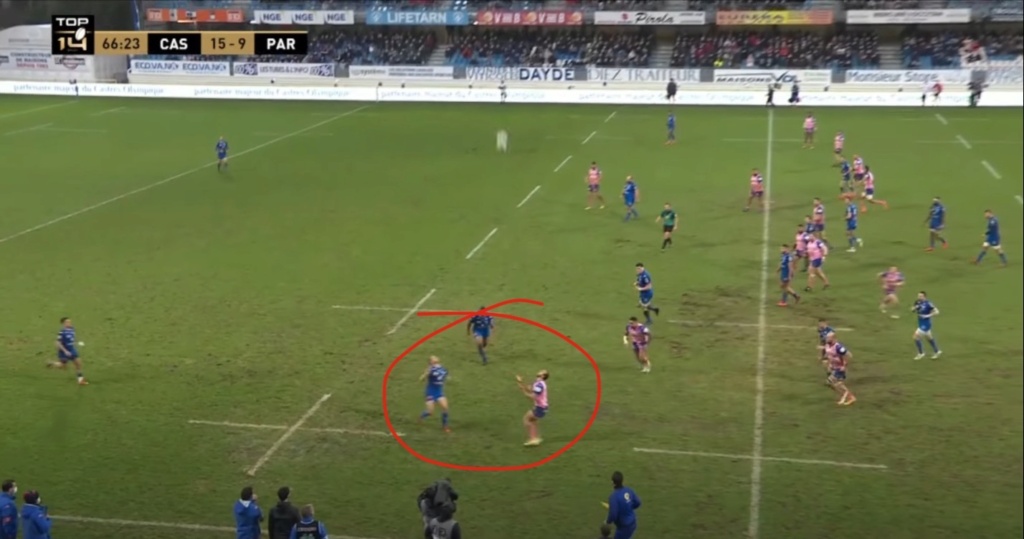 It's not jumping to catch that is the problem - it's the running jump that should be outlawed. If players are underneath the ball and jump for it, there is very little likelihood of a collision causing serious injury.

I'm not really sure it is workable. If a chaser is following his side's kick and looking up and likely back at the ball he will collide with the defender regardless.

I think the only way to prevent those kinds of collision injuries, where one or both players are not looking at each other, is to prevent a contest for the ball by the chaser altogether. Unfortunately.

demosthenes wrote:It's not jumping to catch that is the problem - it's the running jump that should be outlawed.  If players are underneath the ball and jump for it, there is very little likelihood of a collision causing serious injury.

I think that makes sense for straight up and down kicks, but of course they’re not a feature of rugby unless a mis-kick. Usually the kick is travelling laterally (is that the right term) across the pitch. For a player to receive it they need to be running at pace to meet it. To get the best chance of catching it and beating the opposition player to it they then need to jump rather than wait for it to land in their hands. So it becomes a running jump. Unless they can predict where it will land, run extra fast to get there, put the brakes on so they are not moving, and then jump up vertically. Not sure that’s practical!

I get the need for safety. But the thing that annoys me about the law is that both opposition players are in the right when they are running for it, both fine when jumping for it if it is equally contestable, but a split second means that player A is able to catch it first which means that player B is at fault if anything happens to player A. Even if they both get airborne at the same time and do not take their eyes off the ball. A split second the other way and player A would be the one in trouble for touching player B. Just seems unfair and a total lottery when players are both genuinely going for the ball. If we are sticking with that then no jumping/competing at all would be better and fairer I think.

Spot on Oracle. Unfair is right. And I see very few of the carded incidents as ‘bad judgement’ or ‘reckless’. Just accidents. And yet the cards ruin games. And ultimately somewhere down the line a properly bad life altering injury is going to happen.

I think there are two issues here. The first is the collision and potential for injury and the second is how the cards or penalties are administered. I agree completely that penalties and cards are not handed out fairly. It almost seems that referees are compelled to penalise someone when a collision occurs and whoever doesn't catch the ball is the offender.

Really not sure what to do about the collisions when eyes are on the ball and not on the other players.

doctor_grey wrote:I think there are two issues here.  The first is the collision and potential for injury and the second is how the cards or penalties are administered.  I agree completely  that penalties and cards are not handed out fairly.  It almost seems that referees are compelled to penalise someone when a collision occurs and whoever doesn't catch the ball is the offender.

Really not sure what to do about the collisions when eyes are on the ball and not on the other players.

You put it much more succinctly than me, doctor_grey. Yes, that’s my feeling - he who does not catch the ball is the offender when usually it is a 50/50 right up to the point that one player becomes the catcher.

As an aside, what do the rules say when player A and B go up for the ball evenly, 50/50, both with equal chance of getting the ball, and both in the air together. Then player A makes the catch but clatters player B in the air and player B falls awkwardly.... is player A (who now has the ball) penalised with yellow/red? I ask as I only really remember the defender/non-ball winner being penalised for dangerous play on the ball catcher. I can’t remember examples of when the man in possession has been penalised.

As far as I am aware the rules state that as long as both parties have a realistic chance to catch the ball there is no penalty no matter how a player lands.

The way the player lands should only come into it if the person who doesn't get the ball didn't have a realistic chance of catching the ball.

Therefore someone who caught the ball should not be given a penalty against them as by catching the ball they clearly had a realistic chance to catch it.

The problem isn't so much with the law but the way the referees are reffing it at times. The law itself is relatively sensible as it allows a contest in the air that is fair but stops either inetentionally taking someone out or being extremely wreckless when they never had a chance to catch it.

I think you oversimplify the realities there Neil. When you say a realistic chance of. How do you define that. A player still on the ground could claim he was right under the ball, and realistically it was going to land in his arms, but for the other player jumping higher than him. Effectively an interception.

So, what happens is a player on the ground has to either jump also, or be nowhere near the drop zone.

I mean, inadvertently the law pretty much is forcing people to jump to catch. And since jumping is where the danger is, the laws themselves are increasing the level of danger.

People tend to get very focused on the laws, and the referee interpretation.
Laws exist for three reasons that I can see:

The latter is one people seem reluctant to address. They claim these laws around the tackle in the air exist to reduce danger.

Can anyone here claim that the laws achieve that reduction?

I am not arguing that allowing players to jump means there will be collisions and danger, frankly every single thing on a rugby field is dangerous, every thing, all of it. My argument is around the yellow cards the referees give under the current laws, the referee's are not applying the laws correctly.

I played rugby in the back 3 for most of the entire 15 years I played rugby and so I am very well aware of what a realistic chance to catch the ball looks like and what is not. It is open to interpretation which is where the law can fall short as most referees probably are not going to have played wing or fullback and understand what is and is not a fair contest.

If we take away the jumping in the air then it will reduce the likelihood of someone falling on their neck but not the likelihood of collisions as players go focussed on the ball. It will also do 2 other unintended things, make players like myself or like Mike Lowry obsolete and create only George Norths on the wing as having anyone under 6 foot will mean they have no chance to catch the ball. Mean that wingers and fullbacks will have somewhat shorter careers as they will get absolutely mullered every time they catch a kick.

The lifting in the lineout is also dangerous and should then go as well and off course the lifting to catch restarts would also have to go as part of any ban on jumping, i suppose diving for the line too since you would be technically leaving your feet.

If we really wish to reduce the risk of injury there are a lot of laws that need changed, players should have to run straight upwards at all times and never duck as that is a serious risk of injury, jackling should be banned as it leaves someone open to severe injury, tackles to the knees and below are actually really dangerous so they should go as well, definitely no more feet allowed to be used in rucks and in fact rucks should probably go too, scrums are very dangerous so they are also out.

At this stage I'm being facetious but my point is everyone will have to draw their own line on what they consider to be acceptable danger as rugby is an inheritently dangerous sport. For me I have no problem with jumping being allowed in rugby so long as people can compete and a person who doesn't want to compete/has no chance of actually catching the ball but just take someone out in the air cannot do so.

Your line is different and others may very well say some or all of what i said should be banned, thats all fine too, because the question of how do we make rugby safer is a difficult one to broach because of how dangerous the sport is, what should and should not be allowed to exist.

Similar topics
» The danger of jumping
» Another Welsh international jumping ship
» The Last Outlaw
» The outlaw is back!
» Jumping ship.